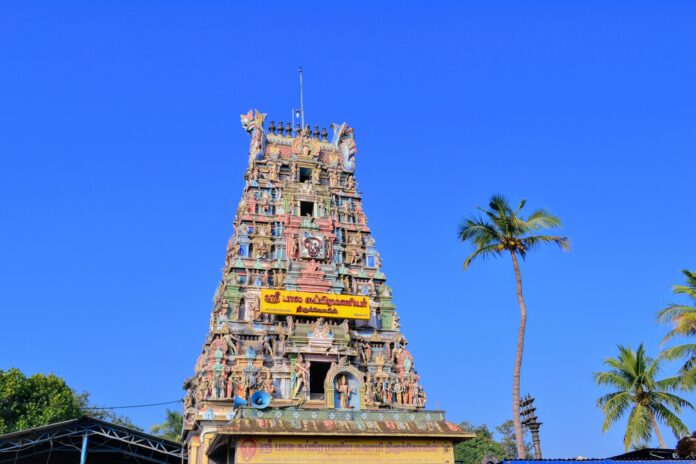 Sri Siruvapuri Murugan Temple, in Siruvapuri is the abode of God Muruga. God Muruga here is called as Balasubramanyar and is said to be capable, allowing the wishes of devotees.

The main deity of this temple is Sri Balasubramaniyar. The temple also houses Thiru Annamalaiyar and Thiru Unnamalai amman.

Muruga is seen as Valli Manalar in a wedding stance with Sri Valli. The Kumara Tantra delineates this structure as having one face and four hands.

The front two hands are one in abhaya mudra and the other in Kadyavalmpitham (hand set on the hip).

In the back two hands he has rudraksa mala and kamandalu. In this structure on the right side we discover Valli in all her magnificence. God Muruga holding the hand of Valli in readiness for wedlock is just the one of its kind at Siruvspuri Sri Balasubramanya Svami Temple.

History of the temple has that Lava and Kusa, the sons of Rama lived in this place. Once when Rama was passing this place, they have fought a war with Rama himself without knowing that he was their father.

As the young children waged a war here, the place was called as Siruvar Por Puri. (Siruvar means children, Por Puri means waging a war, in Thamizh). This place is now called as Chinnambedu, which originally was Siruvar Ambu Edu (children who took their arrows for the fight).

Some hundreds of years back there lived a lady called Murugammai in this village. She had been a very ardent devotee of Lord Muruga here.

She always used to chant His name and praying Him, for years. Her husband who didn’t like her worshipping all the time was warning her to stop it.

But she never listened to him and her husband one day cut her arms off out of anger. Even then, Murugammai cried for help only with Lord Muruga. The Lord who was pleased with her bhakti, made her hands join even without the signs of any wound.

There is a five level raja gopuram. Close to the Kodimaram (Dgwjastambam), there is a delightful emerald (maragada) peacock. There is no peacock alongside the Moolavar (primary divinity) who gives darshan in a standing stance with his vel.

He holds a jabamlai (rosary) in his upper right hand and a kamandalam in his upper left hand like Brahma. Devotees can pick up information and gnananam by loving this Muruga in the Brahma Sastha stance.

All the Navagrahams can be seen alongside their vahanams (vehicles). On the South, there is a sannadhi for Annamalaiar and Unnamulai Amman (emerald symbols). There is additionally a symbol of Muruga with Valli. In the mukha mandapa, there is a scene portraying Arunagirinathar singing the acclaim for God Muruga.

How To Reach SIRUVAPURI MURUGAN TEMPLE?

Chennai is the nearest airport to this temple with 52 km far from the temple.

Ponneri is the nearest railway station 16 km far from the temple.

The Chinnambedu Bus Station is just 1.6 km away from the temple. It connects to all the major cities in Tamil Nadu.