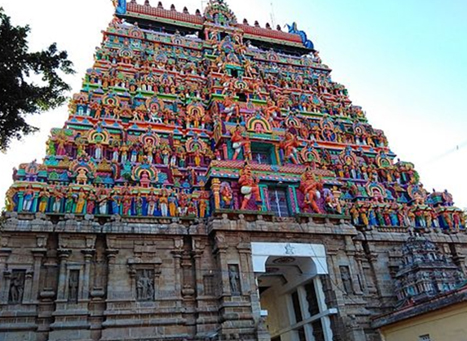 Tamil Nadu, a land of religious diversity and rich culture, is also home to some astonishing temples. Amongst it, there is Kapaleeshwarar Temple, a holy place situated in Mylapore. According to popular folklore, the temple traces its history back to the 7th and 16th century. This place is known for its history, architectural styles, and spirituality. The temple was built to worship Lord Shiva and other deities.

Kapaleeshwarar Temple is a Hindu temple dedicated to lord Shiva located in Mylapore, Chennai in the Indian state of Tamil Nadu. The form of Shiva’s consort Parvati worshipped at this temple is called Karpagambal is from Tamil (“Goddess of the Wish-Yielding Tree”). The temple was built around the 7th century CE.

According to the custom, Goddess Karpagambal is offered a wreath made of gold coins named kaasu maala on the custom of Friday worship. There are separate sannadhis for few Gods like Vinayagar, Annamalaiyar, Murugar and Saneeswara.

The notable feature of this structure is the 37-meter tall gopuram, overpowering the street on which the temple sits. As you enter the temple you can view a sculpture of a holy saint known as Gnanasambandar.

Other than this, you can see the bronze carvings of the 63-Shaivate saints, which are carried on the eighth day of the 10-days long procession during the Aruvathumoovar festival, which is held in March-April. In the courtyard of the temple there is a holy Punnai tree, which is one of the oldest trees of Chennai city.

There is a religious story behind the name ‘Mylapore’ as indicated by the Puranas, the celestial Shakti offered her dedication to Lord Shiva in the form of a peacock. In Tamil, the peacock is called as ‘mayil’.

Consequently, the territory encompassing the temple was created with the name Mylai. The story behind the temple is fascinating. Once, Brahma did not pay his regards to Shiva and Parvathi in Mount Kailash when he saw them.

This infuriated Lord Shiva, and he cut of one of Brahmas head to teach him a lesson. Brahma apologized for his behaviour and came to Mylapore. He introduced a Shiva lingam and started doing poojas that satisfied Lord Shiva.

The head Shiva took away from Brahma was Kapalam and as Brahma introduced a Shiva lingam as a penance for his transgressions, the Shiva Lingam came to be known as Kapaleeswarar.

How To Reach Kapaleeswarar Temple?

Situated almost 17 km away, Chennai International Airport is the nearest airport from Mylapore and Kapaleeshwarar temple. From there, you can take a private cab or bus to reach the temple.

Situated in Mylapore, there are several local buses for visiting Kapaleeshwarar temple. You can find them at Mylapore bus stand, AGS Royal Cinemas, ITC Grand Chola and other landmarks which will drop you at Mambalam Guindy.

There are plenty of options. You can book an online cab or take a taxi. Moreover, you can also rent cars or bikes to reach. Or, you can hail an auto-rickshaw for visiting the temple.

You can find a lot of hotels and resort in Chennai .