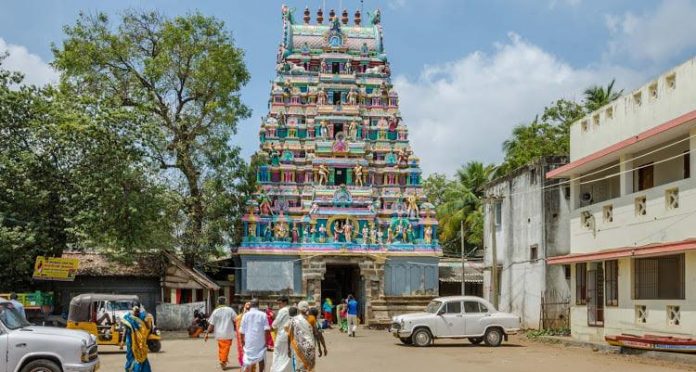 Being one of the 275 Paadal Petra Sthalams, this temple is where Lord Shiva married Parvathi. Hence the presiding deity Kalyanasundarar is seen in marriage pose with his consort Kokilambal. Visiting this temple and performing the parihara removes the obstacles of marriage and its delay.

Parvathi wanted to marry Shiva, and no one else. After an intense meditation, her prayers were answered. The place of her meditation came to be known as “Thirumanancheri,” after the divine marriage took place. In Tamil, “thirumanan” means “marriage.”  “Cheri” means a village.

Thus Thirumanancheri refers to the location where marriages take place. Shiva, in the form of “Kalyanasundareswarar” married Parvathi, addressed as “Kokilambal” here. In Sanskrit, “Kalyanam” refers to a marriage and Kokila refers to the nightingale bird. Lord Shiva is also known as “Udhavaganathar” in Sanskrit.

Together, the divine couple is addressed as ‘Arul Vallal’ and ‘Kuyilinmenmozhiammai’, where the word “kuyil” means the nightingale and as the patron of beautiful birds. The Goddess is also called Parvathasundari. Thus the Kalyanasundareswarar temple is also known as Udhavaganathar temple.

Corresponding to one legend, Shiva and Parvathi once had a celestial fight while playing dice. In a fit of temperamental fury, Shiva transformed His wife into a cow.

Predictably, He began to repent and sought Mahavishnu’s help to regain Goddess Parvathi’s feminine form. Vishnu assumed the form of a cowherd to take safeguard His “sister.” He then released the curse at a place named as “Thiruvaduthurai.”

Parvathi took a bath in the Kaveri river and began to live as Bharatha Muni’s daughter in this location. The muni later presented the girl to Lord Shiva.  The Lord happily asked for her hand in marriage again, at the place now known as “Thirumanancheri.”

As another legend, it transpires that Mount Kailasam became imbalanced during the supremely grand wedding of Shiva and Parvathi. Millions of visitors thronged this abode. To resurrect the balance, Shiva sent Agasthya rishi earthwards to the south, and install a lingam of the Lord, for others to pray.

Agasthya rishi installed a lingam and began to pray to Shiva from the location, now known as Thirumanancheri.

Periodic modifications at the location, by Shiva bhakthas, is what we witness today as Kalyanasundareswarar and Kokilambal at the Udhavaganathar temple.

There is another belief. Two women of yore promised each other that their son and daughter will marry each other, when mature. However, one of the women gave birth to a turtle shaped boy.

The girl’s mother wriggled out of the marriage pact. Disappointed, but determined, the boy’s mother prayed to Shiva, for deliverance.

The Lord, hearing her prayers, transformed the turtle boy into a handsome young man, and the other woman, changed her mind. Their marriage happened at Thirumanancheri.

Thus it is believed that even physically challenged people will get suitable matches, with the Lord’s blessings. Furthermore, such disabilities tend to get ignored if you pray at Thirumanancheri. Two hearts beat as one, ignoring the physical aspects.

The temple is facing east and was constructed by Chola Queen Sembiyan Madevi. There is a moat around the temple. The presiding deity is called as Udhvaganathar / Arul Vallal / Kalyana Sundareswarar & Ambal is called as Kuyilin Men Mozhi Ammai / Kokilambal.

Udhvaganathar as bridegroom and Ambal as bride bowing her head in shyness are giving Dharshan in the moolasthanam.

God and Goddess are present as newly married couple in the south prakaram. There are shrines for Lord Mahavishnu along with Upaya Nachiar, Lakshmi and Mangala Raagu God in full human form on the western side of Sanctum.

Idols of Saneeswara Bhagavan, Pachaiyappa Nathar, Rudra Vaneswarar, Pachaiamman and Nayagi Rudravaneswari are located in the eastern side. As soon as we enter the Sanctum after leaving Rajagopuram Lord Ganapathi can be seen.

Then we can see Dwajasthambam, Balipeedam, Mahanandhi and Mandapam (Great Hall). After leaving Katta Gopuram Varasiddhi Vinayagar can be seen in front of Vinayagar Shobana Mandapam. In Nirutha Mandapam, Natarajar in a dancing exposure can be seen.

In Koshtam, Idols of Pichaadanar, Bala Ganapathi, Natarajar, Lingothpavar, Brahma and Dakshinamoorthy in a yoga posture can be seen. Raghu Bhagwan and Durga are located in a separate Shrine.

A beautiful Lord Vinayagar Sannadhi is located on the Kannimoolai. Idols of Bharatha Maharishi, Sembian Madevi, and Mallappa Naicker were installed in the four directions of Karuvarai.

There is no Navagraha – 9 planets shrine in the temple. Mother is located in her separate shrine with a shy face as a bride. Beside Karu Oomathai, Vanni and Kondrai are also the sacred trees of the temple.

How to Reach Thirumannancheri Temple ?

The nearest airport is located at Tiruchirapalli which is 113 km away from the temple.

Kumbakonam is well connected with all parts of Tamil Nadu. Temple is 29 km away from Railway station.

Several state run buses are available from major cities. you can also travel by road.

Click below to book hotels at the best prices.