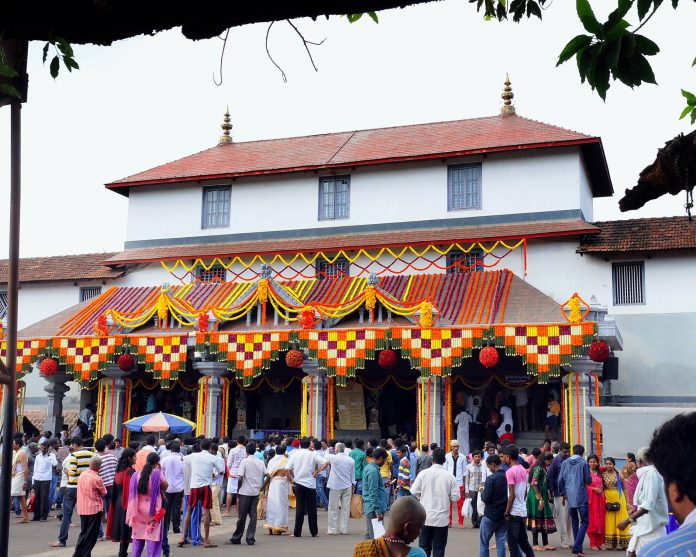 Dharmasthala Temple has presiding deities belonging to both the Hindu and the Jain community.

The word “Dharmasthala” means “the place where the truth or righteousness resides (Dharma meaning the truth and Sthala meaning the place of stay)”. Hence, the place signifies the abode of “Dharma” or truth & justice.

The Dharmasthala Temple is one of the five temples famous in Karnataka as the Pancha Kshetras of Lord Shiva. The other four temples are in Nanjanagud, Sri Murudeshwar, Dhareshwara, and Gokarna.

The priests are Hindus and follow Vaishnavism and the Jain Bunt family (the Pergades) run the temple administration.

According to history, 8000 years ago, the town of Dharmasthala was popular as Kuduma. A Jain chieftain by the name of Birmanna Pergade lived there with his wife Ammu Ballathi.  Nelliadi Beedu was the name of their home. The couple was famous for their generosity and simple life in the community.

Hearing the public talk, the four guardian angels of Dharma arrived at their home in search of a place where they could propagate the philosophy of Dharma.

Hence, the Pergade couple received them in their human forms with great respect and sincerity. The angels were very happy with the hospitality of the couple.

At night, the Lord Dharma visited the couple in their dreams and asked the couple to vacate the house for the worship of the Daivas (Gods) and dedicate their lives to propagate Dharma. The Pergades then left the house and started worshiping the Dharma Gods.

The Dharma Daivas appeared once more and communicated to the Pergades that they have to build separate shrines for the four Dharma Daivas – Kalaharu, Kalarkai, Kumaraswami, and Kanyakumari.

He also needed to choose two persons of Noble birth to act as an oracle for the Daivas and four persons for helping the Pergades in administration.  The Daivas, in turn, promised the Pergade family protection from all evils, abundance in funds and fame.

As instructed, Shri Pergade built the four shrines and invited the Brahmin priests to perform the rituals. On the request of the Brahmins, he sent Annappa Swamy, to procure the idol of Shri Manjunathaswamy from Kadri. Later, a shrine was built making Dharmasthala as Lord Manjunathaswamy’s abode.

In the 16th century by Shri Vadiraja Swamy of Udupi performed the consecration ceremony of the Linga by following the holy Vedic rites.

The temple has been built following the Kerala temple architecture. The architecture of temples in Kerala is different from the other areas in India.

The architectural style of the temple follows suit and has an inherent simplicity. The temple has a very distinct style of architecture coupled with a lavish use of wood, stone and metals. The base structure of the temple is made using granite and laterite.

The temple has a square plan and thus a pyramidal roof. The steep and needle like roof is made of wood and is covered with gold-plated copper plates in order to protect the inner skeletal framework from the vigorous monsoons of the western ghats.

Recently, a meticulously planned renovation was conducted at the temple to renew the wood carvings and apply methods to protect the architectural components from external physical or climatic adversities.

Kindly Note: Dharmasthala Temple serves very hygienic food for free and is a must-have. The timings are from 12:00 PM to 2:00 PM.

How To Reach Dharmasthala Temple?

Mangalore International Airport is the nearest airport located at about 65KM.

The nearest railway station is Mangalore Railway Station which is 74 Kms away from the temple.

The railway station is well connected to all the major cities and towns in India. Travellers can hire taxis/cabs or take buses to reach Dharmasthala from Mangalore.

Tourists can travel by KSRTC (Karnataka State Road Transport Corporation) buses to reach Dharmasthala from all over the state. Private buses or by their own vehicles to reach the temple.

Places To Visit Nearby

The Kukke Subramanya Temple is located in the picturesque Western Ghats range of Karnataka. Overlooking the temple is the famous mountain of Kumara Parvatha, a popular trekking destination for trekkers from across South India.

The temple is situated in the midst of the lush green western ghats providing one both spiritual and natural relaxation.

Jamalabad Fort is an old hilltop fort ahead on dharmasthala towards Belthangady on Killoor road, about 15 km away from Dharmasthala, 8 km north of Belthangady town and 65 km from the city of Mangalore.

The fort is 1700 ft above sea level and was formerly called Narasimha Ghada. It is also referred locally as “Jamalagadda” or “Gadaikallu”. The fort is also one of the favourite spots for trekkers in the region.

Where To Stay in Dharmasthala?

The Dharmasthala Temple management operates ten guest houses all of which contain basic and hygienic amenities.