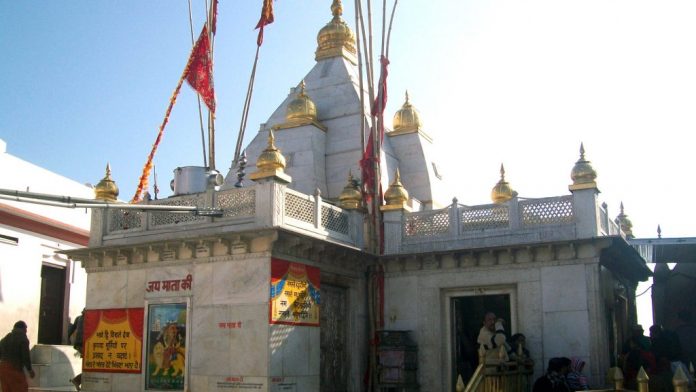 Shri Naina Devi Temple is one of the e 51 Shaktipeeths . Located in Distt Bilaspur, this tremple is believed to be the place where the eyes of Mata Sati fell on Earth.

Naina Devi Temple is located on a triangular-shaped hill also known as Naina Dhar hill, which is 3535 feet above the sea level. The temple attracts a large number of worshippers as the place is believed to be the famous shrine of Goddess Sati.

The moment you enter the vicinity of this temple, a calming aura of the place that takes over your senses and certain lightness and calmness is experienced. Also, the temple compound provides an unobstructed view of the Nainital lake.

Several mythological stories are associated with the establishment of the temple.

According to a legend, Goddess Sati burnt herself alive in Yagna, which distressed Lord Shiva. He picked the corpse of Sati on her shoulder and started his Taandav dance. This horrified all deities in the heaven as this could lead to holocaust.

This urged Lord Vishnu to unleash his Chakra that cut the Sati’s body into 51 pieces. Shri Naina Devi Temple is the place where eyes of Sati fell down.

Another story related to the temple is of a Gujjar Boy named Naina. Once he was grazing his cattle and observed that a white cow is showering milk from her udders on a stone.

He saw the same thing for next several days. One night while sleeping, he saw Goddess in her dreams who told him that the stone is her Pindi. Naina told about the entire situation and his dream to Raja Bir Chand. When Raja saw it happening in reality, he built a temple on that spot and named the temple after Naina’s name.

According to another legends, Mahishasur was a powerful demon who was blessed by the boon of immortality by Lord Brahma, but the condition was that he could be defeated only by an unmarried woman.

Due to this boon, Mahishasur started spreading terror on Earth and Gods. To cope with the demon, all Gods combined their powers and created a Devi to defeat him.

The Devi was gifted different types of weapons by all Gods. When Mahishasur got mesmerized by the immense beauty of Devi and proposed her to marry him. Devi told him that she will marry him if he would overpower her.

During the battle, Devi defeated the demon and took out both his eyes. This urged Gods to happily applaud “Jai Naina” and hence the name.

One more famous tale is associated with the temple is of the great Sikh Guru Gobind Singh. when he left for his military campaign against Mughals in1756, he performed a sacrificial yagna to seek blessings of the Goddess.

After getting the blessings, he eventually defeated the Mughals in the battle and that’s why the place is called the “Temple of Strength”.

How to Reach Naina Devi Temple ?

The nearest Airport is situated at Chandigarh which is at a distance of approximately 100 Kms from the temple.

The nearest Railway Station is situated at Sri Anandpur Sahib at a distance of 20 KMs from the temple.

Ropeway facility is also available by the temple authorities. The price of using the ropeway for one way journey is 55 INR .Timings of which have been given below:-

Free stay maintained by temple trustees:Trust has constructed the Patiala Dharamshala, langar and another motel near langar area that provides free staying facility to 1,000 devotees.

Paid stay maintained by temple trustees:Temple Trust has also constructed Matri Aanchal,Matri Chahya and Matri Sharan  staying shelters with a capacity of 45 rooms and 14 dormitories. The cost of staying at these places is very nominal and affordable.

Also,there are lot of Private hotels and lodges available which are at a close proximity to Naina Devi temple.Good rated hotels are available where one can accomodate.

The Source of the above information is the official website of Shri Naina Devi Temple Trust Website.