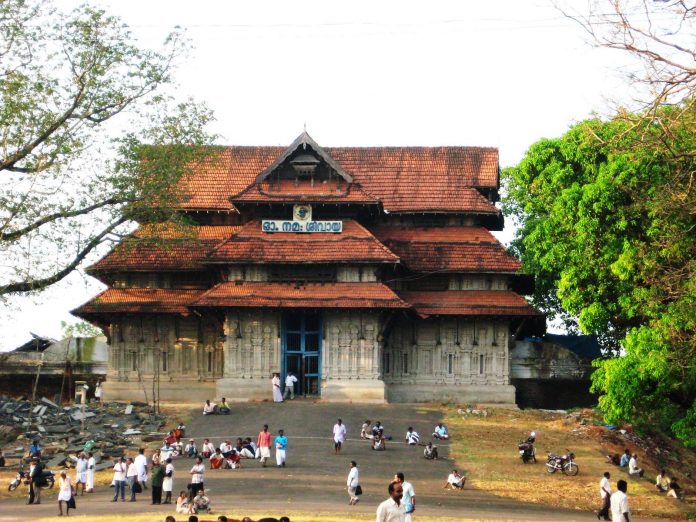 Vadakkunnathan Temple is a Shiva temple located in Thrissur and is one of the oldest shrines of Kerala.

The temple situated in the very centre of town on an eminence commanding a view of neighbouring areas all around. No historian or scholar has been able to ascertain the time when this temple came into existence.

Our knowledge of the origin of this temple comes from legends. According to legends the original “Prathishta” was done by Lord Parasurama, an incarnation of Vishnu and it must have been done at least four thousand years ago.

As per the archaeological findings, Vadakkunathan temple is one of the oldest temples of the Southern India and is the largest temple of the Kerala which is dedicated to worshipping Lord Shiva.

This religious place is an extraordinary example of the classical Kerala style of architecture featuring outstanding murals of the 17th century echoing the story of Mahabharata. The wood carved vignettes are displayed in the Koothambalam and shrines.

One interesting thing about the temple is that it is believed to be the place where Tipu Sultan camped, though this fact has been associated with many disputes and many historians have not supported the idea.

The main deity of the temple is Lord Siva, other idols installed in the temple are those to Sree Parvati, Ganesha, Sankaranarayana and Sree Rama. Parvati, is sanctify in the sanctum of Lord Shiva it self in opposite direction. There are separate sanctum for Krishna, Rishabha, Simhodhara, Dharma sastha Vettakkara, Dharmasastha, Naga Devatas and Adhishankara on the circumambulatory path.

The story of the origin of the Wadakkunathan Temple is briefly narrated in “Brahmanda Purana”. Parashurama exterminated Kshatriyas twenty one times. In order to expiate the sin, he performed a “yajna” at the end of which he gave away all the land to Brahmins as “dakshina”.

He wanted to retire to some new land to do and so he requested the sea god Varuna to throw up a new piece of land from the sea. According to another version, some sages approached him at the end of the yajna and requested him to give them some secluded land. Parashurama then made the request to Varuna for their sake.

Varuna gave him a winnow (surpa) and asked him to hurl it into the sea; as he did a large territory of land was at once thrown up by the sea; this territory that rose out of the sea was Kerala. It was then known by the name “Surparaka”, from the word, “Surpa” meaning winnow. According to some other version Varuna asked Parashurama to hurl his axe into the sea.

Parashurama now wanted to give a divine attire to this new land. So he went to Mount Kailash to his guru, Lord Shiva and requested him to take abode in Kerala and thereby bless the region. Shiva accompanied by his wife Parvati, his sons Ganesha and Subrahmanya and his parshadas went along with Parashurama, to satisfy the desire of his disciple.

Shiva stopped at a spot, now Thrissur, for his seat and later he and his party disappeared and Parashurama saw a bright and radiant Shiva “linga” (aniconic symbol of Shiva) at the foot of a huge banyan tree. This place where Shiva first manifested his presence through the “linga” came to be called the “Sreemoolasthana”. This is enunciated as the story of beginning of Sree Wadakkunathan Temple.

For sometime, the linga remained at “Sreemoola Sthana” at the foot of a huge banyan tree. Later a ruler of Cochin State,of which Thrissur formed a part, then decided to shift the “linga” to a more convenient place and build a temple. Arrangements were soon made to reinstall the idol in the new place.

But there was an initial difficulty. The “linga” could not be removed without cutting off a large part of the banyan tree. While cutting the branches of the tree, there was the danger of a piece of it falling on the idol and damaging it.

When the ruler and the others did not know what to do, the “Yogatirippadu” came forward with a solution. He lay over the idol so as to cover it completely and asked the men to cut the tree. The cutting began and to the wonder of all not a piece of the tree fell anywhere near the idol. The idol was removed with all due rituals and installed in the new place where it has remained till now.

There is a strict dress code in order to enter the temple premisis.

How to Reach Vadakkunnathan Temple?

The nearest airport is the Kochi International Airport. It is at Nedumbassery and approximately 53 km from the shrine.

The nearest railway station is Thrissur. It is at 3 km from the temple. All trains to Kerala pass through the place.

Thrissur is easily reachable through roads as well. You can drive from all parts of Kerala, Tamil Nadu and Karnataka to Vadakkunnathan Temple.

KTDC Tamarind Thrissur is a hotel sponsored by the Kerala tourism department. It is just within 2 km from the Vadakkunnathan Temple.