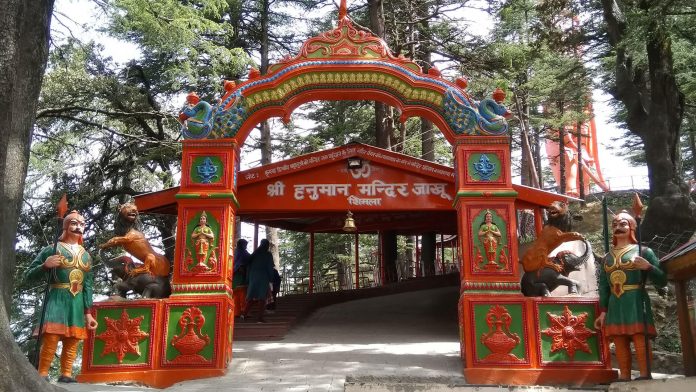 Jhaku Temple (also spelled as Jhakoo/Jakhu Temple) is an ancient temple located in Shimla, Himachal Pradesh. Dedicated to Lord Hanuman, this temple is situated at a Jhakoo Hill in Shimla at a height of 2,455 m (8,048 feet) above sea level.

Shimla has also been referred to as Queen of Hills which once was the summer capital of British and which later went to become one of the most popular hill stations in India. Shimla is surrounded by forests of Pine, Deodar, Oak and Rhododendron.

Jhaku temple dates back to the Ramayana period, it is said that after getting injured by Indrajeet’s vicious arrow Lord Lakshman became unconcious, to cure him the Vaidya(physician) suggested Lord Rama to bring Sanjeevani Booti from Himalaya’s , this responsibility was given to Lord Hanuman .

It is said that he took some rest on the Jhakoo hill before going to himalays to procure the herb.

The moment Hanuman landed on the hill, the hill could not bear his weight. As a result, the line runs hilly ground. More than half the land went into the original mountain.

The name of the hill ‘Jakhu’ came into existense after a sage named  Yaku. Hanuman bowed to the sage and received detailed information about the lifesaving herb sage promised to bring lifesaving time will surely come to the hermitage of sage.

Unfortunately, due to shortage of time Hanuman skipped meeting with the sage .

Later, To keep his promise, Lord Hanuman visited sage Yaku and told the reason for not meeting him. To respect the Hanuman’s visit, Yaku decided to build the
temple there.

Jahku Temple attracts devotees all across the country.

The Tall Statue Guards The City

Recently in 2010, a 108 Feet tall statue of Lord Hanuman was erected near the temple and it was unveild by Abhishek Bachan.

Footmarks of the Deity

It is said that the temple has footmarks of hanuman Ji when he visited this site.

Free Prasad To All Devotees

Prasad is provide free of cost to all devotees after pooja and all the expenses incurred are borne by the Trustees.

The temple also has Ropeway service which can be availed by paying a fee of 500/Adult. You can view beautiful valleys from it.

Apart for being famous for ithe beauty and heritage , this temple is also popular for mischevious descendants of Hanuman who often target bags and items of devotees.

So ensure not to carry anything that could be stolen from you.

How to Reach Jhaku Temple ?

The nearest airport to the temple is Shimla Airport which is located in Jubbarhatti which is about 23 KM from the temple.

The nearest railway station is Shimla Train Station which is 2 km away from Jakhoo Temple.

Travelling by car/bus is the best option to travel to Jhaku temple because of the wondrful road connectivity and a good frequency of public as well as private buses.

The has a lot of dharamshala’s as well as private hotels where one can opt to stay. Moreover Shimla being a popular tourist place gives you a lot of options to stay in the beautiful hill city.

Places To Visit Nearby

Mall Road: This place is a hip and happening location in this hill station and attracts visitors of all ages. With plenty of cafes, restaurants, showrooms, departmental stores.

The Ridge: This tourist spot is actually a wide-open street that runs along the Mall Road from east to west and connects it to the famous Scandal Point. It is popular for the scenic views of snow capped mountains.

Kalka-Shimla Railway:  Built in 1898, this narrow-gauge railway has recently been added to the mountain railways of India World Heritage Site by UNESCO. Winding through the extremely scenic and mountainous route from the Shivalik Range foothills.