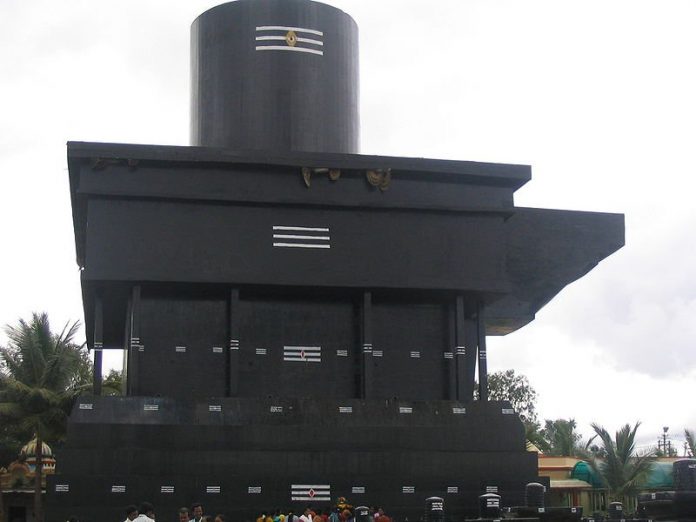 Kotilingeshwara Temple is a Hindu temple dedicated to Lord Shiva. It is is located in Kolar district, Karnataka.

‘Koti’ in Kannada means a crore and Kotilingeshwara is 1 crore Shivalingas. The temple with the tallest Shivalinga in the world is installed here along with 90+ lakh other Shivalingas of different sizes.

The 33 mts high Shivalinga and 11 mts high Lord Nandi, the Bull are the main attractions of the temple. The temple is open for donations of Shivalingas of various sizes which can be installed with the name of the donor embedded on it.

This temple has been constructed by Swami Sambha Shiva Murthy in the year 1980. The first linga was installed in 1980 and since then there have been many lingas present in the temple. There is also a huge and tall Nandi installed beside the linga. The Nandi is 11 mt tall and sits over a huge platform.

Manjunatha Sharma or Bhakta Manujnatha was born in the family of Shaiva Hindu Brahmins.He was a person of good character but he does not believe in the existence of God.

Moreover, he used to insult Lord Shiva while he was a child and grew up insulting him.

But one day he realized the divinity of Lord Shiva and became his devotee.When one day Bhakta Manjunatha and his family visited the local Shiva Temple in the village, many incidents happened which are said to be bad omens.

One incident included the unlit of all the deeps (incensed lamp) in the temple premises. Other people in the temple accused Bhakta Manjunatha for the cause.

There was one more person in the temple, Maharaha Ambikeshwaravarma, a local viceroy for the ruling Rashtrakuta Dynasty. He approached Manjunatha for proving his innocence.

Then he and Manjunatha sang the devotional song Mayaka Deepam. After that all the deepas in the temple lit again and with more brightness.

All the people accepted the fact that Manjunatha is now a different person. Moreover, Manjunatha accepted that he has insulted Lord Shiva at least ten million time in his life.

Therefore, to free himself from his past sins, Manjunatha under the support of Ambikeshwaravarma created 10 million (one crore) Shiva Lingas. Hence, the name Kotilingeshwara, where Koti means crore.

These Lingas were installed in the area which is now known as Kotilingeshwara Temple.

Within the premises of the temple, there are about eleven other temples for different deities. The first of them includes the temple of Lord Vishnu, Lord Brahma, and Lord Maheshwara temples. This is followed by a temple of Lord Kotilingeshwara.

How To Reach Kotilingeshwara Temple?

Bengaluru Kempegouda International Airport is the nearest Airport which is around 100 KM from the temple.

Koramandal is of nearest railway station from Kotilingeshwar Temple which is around 8 KM away.

Kammasandra Gram Panchayat is nearest bus-stop from Kotilingeshwar Temple and is around 500mtr away.