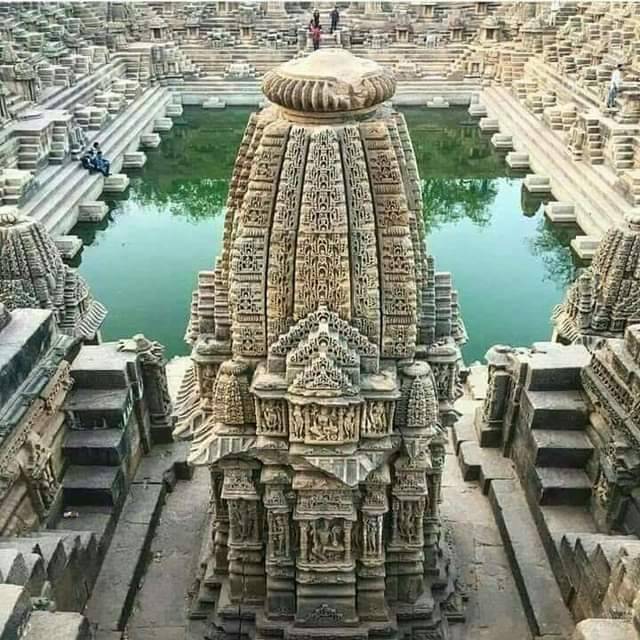 Modhera Sun Temple is a hindu temple dedicated to Sun God and is located at Modhera village of Mehsana district, Gujarat, India. It is situated on the bank of the river Pushpavati.

The exclusively carved temple complex and the magnificently sculpted kund are jewels in the art of masonry of the Solanki period apparently which was also known as the Golden Age of Gujarat. Savor your voyage through time to the magnificent eons of the Golden period as you get welcomed personally by the life like icons, narrating stories and legends of Modhera.

The shrine proper of the Sun Temple was built during the reign of Bhima I of Chaulukya dynasty. Earlier, during 1024–1025, Mahmud of Ghazni had invaded Bhima’s kingdom, and a force of around 20,000 soldiers had unsuccessfully tried to check his advance at Modhera. Historian A. K. Majumdar theorizes that the Sun Temple might have been built to commemorate this defense.

On a block in western wall of cella, there is an inscription “Vikram Samvat 1083” upside down carelessly incised in Devnagari script which correspond to 1026-1027 CE. No other date is found. As the inscription is upside down, it evidences the destruction and reconstruction of the cella.

Due to the position of the inscription, it is not firmly considered as the date of construction. On the stylistic ground, it is known that the Kunda with its corner shrines was built earlier at the beginning of the 11th century.

The inscription is rather considered as the date of destruction by Ghazni instead of the construction. Soon after Bhima had returned to the power. So the temple proper, the miniature and the niche shrines in the tank were built shortly after 1026 CE.

The dancing hall was added much later in the third quarter of the 12th century along with the gateways, the porch of the temple proper and the doorframes of the temple and the cella during the reign of the Karna.

The place was later known as Sita ni Chauri and Ramkund locally. No worship is offered here now. The temple is the Monument of National Importance and is maintained by the Archeological Survey of India.

Things to do: Modhera is a perfect destination for being faraway from the hustle-bustle of town life for a day. The unruffled peaceful landscape and also the majestically hospitable temple complex can guarantee to take you faraway from the mundane routines of everyday life to the fantastic times back in the Golden Age.

How To Reach Modhera Sun Temple?

Sardar Vallabh Bhai Patel International Airport is the nearest airport which is located at about 95 KM from Modhera. Cabs and taxi are easily available for further travel.

The nearest railhead is at BECHARJI (BHRJ), which is at a distance of around 15 km from Modhera. One can opt for a taxi or a bus to reach the temple.