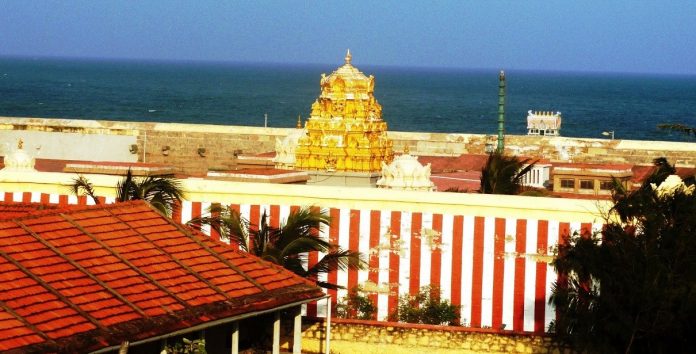 Apart from being an ancient temple , it is known for being one of the 51 Shakti Peethas. It is believed that the right shoulder and (back) spine area of Sati’s corpse fell here creating the presence of Kundalini Shakti in the region.

Note worthy feature of the presiding idol of the Goddess Kanya Kumari is the diamond nose ring of the Goddess. There are many popular stories related to the striking shine of the nose ring.

According to legend, the nose ring diamond was obtained from King Cobra.

As per one popular tale, the reflection from the nose ring is so bright that once a sailor mistook it to be a lighthouse and ultimately hit the ship on the rocks.

That is why eastern door of the temple is kept closed and is opened only five times in a year, on special occasions.

According to history, worship of Goddess goes back to Vedic times and monotheism to Advaita times. goddess Kanyakumari finds mention in Ramayana, Mahabharata, and Sangam work Manimekalai.

Goddess Kanyakumari features a mysterious story that when Banusura, the demon king got power over Devas and gave cruel penalty to them.

The Devas performed a Yagna seaking to penalize and take away the evils.

Thus goddess Parasakthi came to Kumari within the form of a virgin woman and started her penance.

in the meantime Lord Shiva fell loving along with her and created arrangements for the wedding in the midnight on a selected day.

Now the Narada realized that their wedding would destroy the possibilities of castrating Banusura as only a virgin may kill him.

Once Lord Shiva was on his way to Kanyakumari, Sage Narada assumed the shape of a cock and crowed falsely heralding the break of dawn.

Thinking that the auspicious time for the wedding was past, Lord Shiva came thwarted. The divinity too set to stay virgin at that time.

Then, once Banusura tried to win the immortal by force, she killed him along with her Chakragudha, and eased the sufferings of Devas.

Then she resumed her penance and remained virgin.

Later, Banasura asked Goddess for mercy and prayed her to absolve his sins. Goddess forgave him and blessed the water of holy confluence. It is said that whoever takes a dip in the waters here, washes off his/her sins.

How To Reach Kanyakumari Temple?

The nearest airport to reach Kanyakumari is the Trivandrum international airport which is located at a distance of about 82 km from the temple. Taxis and buses are available fo last mile connectivity.

Kanyakumari junction railway station is the nearest railway staion to the temple which is located at around 4km. One can opt for an auto to reach the temple.

Regular fleet of buses from all major cities of South India like Trivandrum, Chennai, Madurai, Nagarcoil and Bangalore ply to Kanyakumari.

Private as well as Tamil Nadu and Kanyakumari Road Transport Corporation buses can be availed to reach Kanyakumari. You can avail both AC as well as non – AC buses.

Though AC buses are recommended considering the hot humid weather.