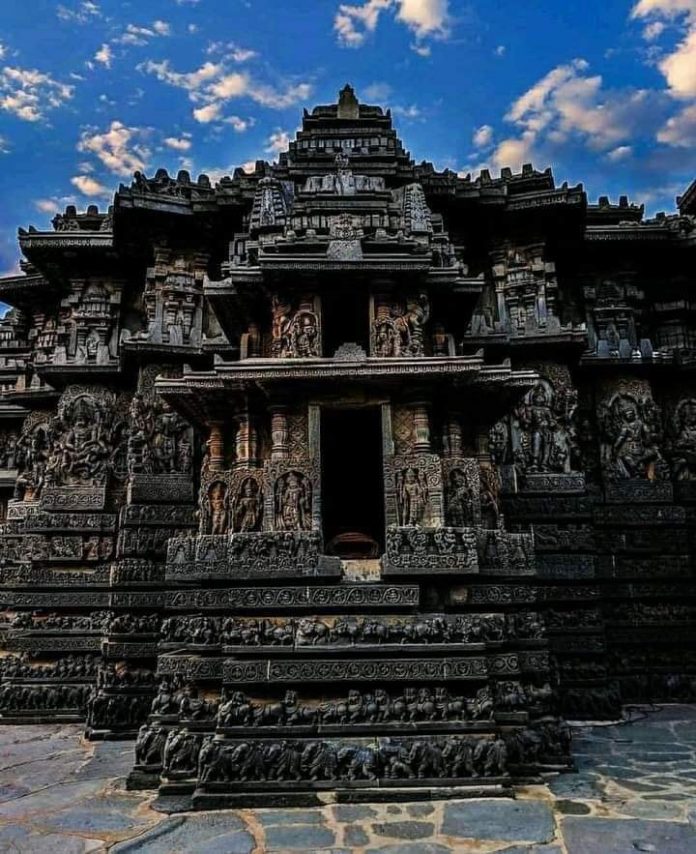 Chennakeshava Temple, also referred to as Vijayanarayana Temple of Belur, is a 12th-century Hindu temple in Karnataka state, India. It was built by Hoysala King Vishnuvardhana to commemorate his victory over the Cholas in 1116 AD.

The temple is believed to have been built by master craftsmen – Dasoja and Chavana, a father and son duo.

The Hoysalas used soft soapstone for their structures as they were found suitable for intricate carvings. Enclosed by a Prakara with a Gopurabuilt in the Vijayanagar style, the temple stands on a platform or Jagati and looks like a huge casket. The fine workmanship and skill visible in this masterpiece is truly breathtaking.

Chennakesava temple is a fine example of fine quality work of art in stone. There are more than 80 Madanika sculptures in the temple, dancing, hunting, standing under canopies of trees and so on.

The 4 Madanika figures (striking elegant dancing poses) on the wonderfully engraved columns of Navaranga are unique creations of Hoysala workmanship.

The Garbhagriha is stellar in shape and its zigzag walls make the figures of 24 forms of Vishnu. It look different at different times of the day due to light.

The temple was built by master craftsmen – Dasoja and Chavana, a father and son duo, hailing from Balliganve, a centre of Kalyana Chalukya art in Shimoga district.

It is said that Shantaladevi, the accomplished queen of King Vishnuvardhana is the model for one of the sculptures in the Vavaranga – Darpana Sundari. This work of art alone, speaks for the beauty of the magnificient temple.

The temples of Kappe Chennigaraya, Soumyanayaki, Andal and other Vaishnava manifestations surround this main temple. Belur also has a samadhi believed to be of Raghavanka, the celebrated Kannada poet of the 13th century.

The rathotsava is a two-day affair during which Channakeshava’s idol is adorned with gold and diamond jewellery gifted by the erstwhile kings of the kingdom of Mysuru. Earlier, some Hindu organisations had objected to the recital of the Quran, citing the prevalent tensions in the state.

How To Reach Chennakeshava Temple?

The nearest airport is Bangalore which is located at about 220 kilometers  from where one can take flights to other major destinations in India and abroad.

The nearest railway station to the temple is SAKLESHPUR located at about 26 km.

Belur is about 38 Km from Hassan. Regular Bus services and tourist taxies are available from Hassan.