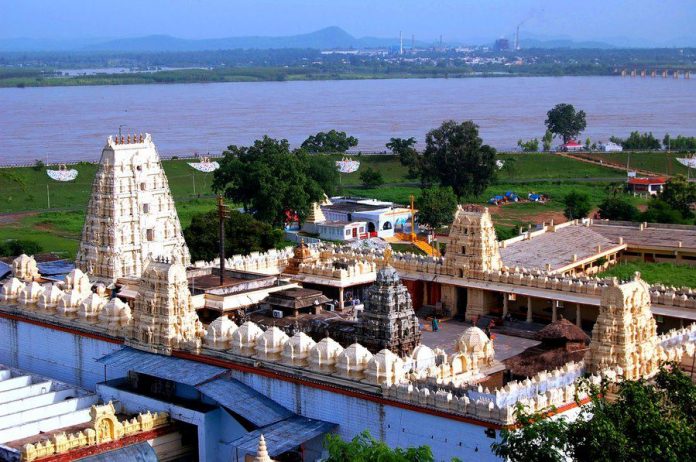 Bhadrachalam Temple is a hindu temple dedicated to Lord Rama and is located at the banks of the Godavari River in the town of Bhadrachalam in east Telangana, India.

The temple in Bhadrachalam is closely connected with the life of the 17th-century saint composer Kancharla Gopanna who was known as Bhakta Ramadas. Gopanna was the Tahasildar of Bhadrachalam (second half of the 17th century), is said to have used money from the government treasury to build this temple, and was imprisoned in a dungeon at Golconda.

Lord Rama is said to have miraculously given the Sultan the money spent by Gopanna, after which he was released. Gopanna then became Bhadrachala Ramadasa and went on to compose innumerable number of songs in Telugu in praise of Rama.

Bhadrachalam and Vijayanagara are sites said to have been closely associated with the Ramayana. Rama, Sita and Lakshmana are said to have stayed at Parnasala, 35 km away from Bhadrachalam. Rama is said to have crossed the river Godavari on his way to Sri Lanka to rescue Sita, at the spot where the Bhadrachalam temple stands, on the northern bank of the river.

Legend has it that the son of Meru and Menaka, Bhadra, performed penances towards Rama here. Kabirdas, a Muslim by birth is also closely associated with this temple. It is believed that the images of the deities miraculously disappeared when Kabir was refused entry into the temple and that they reappeared miraculously upon his being permitted to enter.

Bhadrachalam attracts hundreds of thousands of devotees from all over the world. This hill place that is encircled by Holy River Godavari flowing towards southern direction is the famous shrine Bhadrachalam. The name is derived from Bhadragiri (Mountain of Bhadra: a boon child of Meru and Menaka).

The history of this shrine stands for the significance of Ramayana Era, the coherent hill place existed in “Dandakaranya” of Ramayana period where Rama with his consort Sita and brother Lakshmana had spent their vanavasa.

The vicinity of the temple had its incongruous mixture in another story which depicts the exigency of “Sri Mahavishnu” to manifest himself as Rama and shuffled again to the mortal coil — long after Ramavatara was to fulfill his promise to his Bhakta Bhadra (a mountain king), a sage who had been continuing the intense penance to get grace of Lord Rama.

How to Reach Bhadrachalam Temple ?

Vijayawada is the nearest airport from where flights are available from all across the nation. Cab service is easily available for the further travel.

The nearest Railway station is Kothagudem which is about 40 km from the temple. You can opt for bus service or taxi to the temple.

Some of the places where one can stay near Bhadrachalam Temple are: