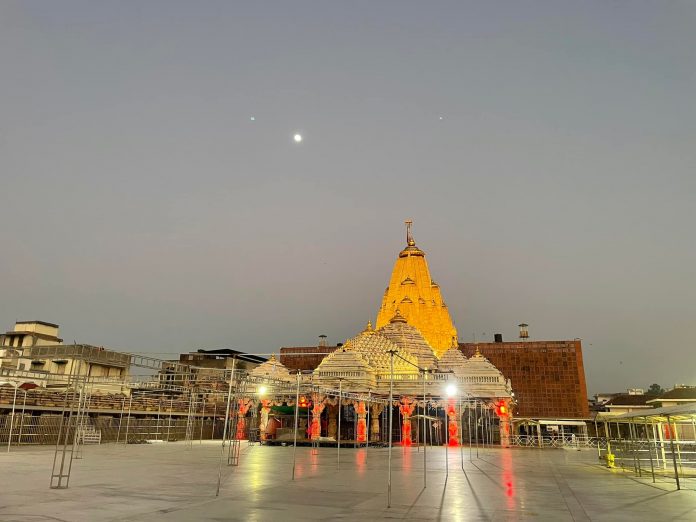 Ambaji temple also known as Shri Arasuri Ambaji Mata Mandir is a famous Shaktipeeth located at Danta taluka of Banaskantha district in the state of Gujarat.

The heart of Goddess Sati is believed to have fallen at the site of Ambaji temple.

This is the principal shrine of a goddess who has been worshiped since the pre-Vedic period. She is often referred to as Arasuri Amba, named for the location of the temple in the Arasur hills, near the source of the Saraswati river at the south-western end of the Aravali mountain range.

History of the Temple

Mythology says that the original temple is dedicated to Maa Ambe Arasuri and it is built on top of a hill called Gabbar Hillock. This is the site where the heart of Goddess Sati fell after her body disintegrated into 51 sacred pieces post the Tandav dance of Shiva. The original Danta temple was worshipped by devotees till the King Danta fervently requested the Goddess to reside in Danta.

The Goddess granted his request with one condition that the king should not look back even one time till he reached the temple of Danta. In case he failed to do so the Goddess would not shift. The king accordingly led the Goddess down the ill towards the site of Danta.

The anklets of the Goddess tinkled and seemed to signal her movements behind the king. However, the king could not resist his curiosity and peeped back for a small look. The Goddess (true to her word) refused to budge even a n inch and the disappointed king had to go away. The place where the Goddess stopped her sojourn was the site of Ambaji temple. Some pilgrims consider their visit incomplete till they have visited both Ambaji temples.

Architecture of the Temple

The red flag above the small temple dances welcomingly in the wind. Made of white marble with gold cones, the temple was originally built by Nagar Brahmins. There is a main entrance in the front and only a small side-door, because it is believed that Mataji (another name for Ambaji) has forbidden the addition of any other door.

The temple is surrounded by an open square called chachar chowk where ceremonial sacrifices called havans are performed.

The inner sanctum of the temple has silver-plated doors. There is a gokh, or niche, in the wall on which is fixed a old-plated marble inscription of the Viso Yantra, a Vedic text on sacred geometry, which is the main focus of worship.

There is no idol of the goddess, perhaps because the temple is so ancient that it predates idol-worship, but the priests decorate the upper portion of the gokh in such a way that it looks like an idol of a goddess from a distance.

Be sure to look across the temple (i.e. with your back facing the goddess) at the other temple on the Gabbar, considered the original abode of the goddess. At a short distance from the Ambaji temple is a large rectangular kund, with steps on all its four sides, called Mansarovar.

The ecstatic festival of Navratri is celebrated all over Gujarat in reverence of Ambaji, by dancing garba around the Holy Mother. On these nine nights the Nayak and Bhojok communities also perform bhavai theater.

As per a legend said in Ramayan, Lord Rama and Laxman came to Ashram of Shrungi Rushi in search of Sitaji, where they were told to worship Devi Ambaji at Gabbar. And Rama did so and Jagat Mata Shakti Devi Ambaji gave him an miraculous arrow namely “Ajay”, with the help of which Rama conquered and killed his enemy Ravan in the war.

It is also a legend that the hairs of holy child Lord Krishna were also removed here on this Gabbar hill , as a holy ritual ceremony of hair removing Mundan, in presence of his foster parents Nand and Yashoda, who had worshiped Devi Ambaji and Lord Shiva, during the period of Dwapar yug.

The Well Known Rajput King of Mewar, Maha Rana Pratap was a true devotee of Arasuri Amba Bhawani. He was once saved by Mata Ambaji, so he had gifted and dedicated his famous sword to the holy feet of Mata Arasuri Ambaji.

As per Mahabharat, on  the Full Moon Day Purnima of the month of Bhadrapad (Bhadarva Mas) Princess Rukshamani had worshiped her Kul- Devi Mata Ambica on the mountain of Gabbar Hill, in order to invite her beloved Lord Krishna, to abduct her from her Swayamvar to marry and Mata Ambica gave her a boon to achieve her goal to marry Lord Krishna, as against the wish of her brother and relatives and other kings.

And Princess Rukshamani wedded with the Lord Krishna and became Pat-Rani, the main Queen and had celebrated the well known Indian Festival of Navratri, for the first time on this earth, in the Garbh- Deep Nrutya in Gujarati Garba Style, with her friends & relatives in Dwarka.

How to Reach Ambaji Temple ?

The Nearest airport is Sardar Vallabh Patel airport which is located in Ahmedabad at a distance of 178 Km from the temple.

From there you can take a taxi to the temple.

The nearest railway station is Palanpur , which is about 65 km away from the temple. From there you may take a taxi or bus to the temple.

Ambaji is in Danta Taluka of Banaskantha district, near the Gujarat-Rajasthan border. The walk from the bus station to the temple is less than one kilometer, under a roofed walkway. Direct buses are available from many places

In order to furnish an economic yet with some higher and more comfortable lodging & boarding facilities to all class of pilgrims and devotees of Mata Amba Bhawani, Shri. Arasuri Ambaji Mata Devasthan Trust has founded a new multi story building, namely, Shri. Jagat Janani Pathikashram in opposition to the sites of Ambica Vishram Gruh and State Transport Bus Station Depot.