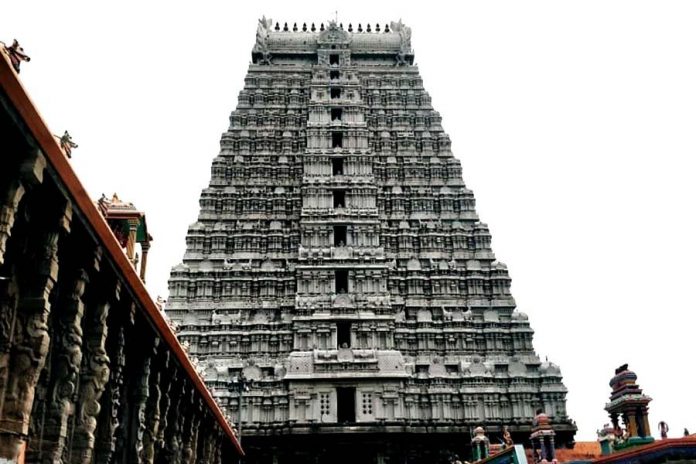 Arunachalam Temple also known as Arunachalesvara Temple or Arulmigu Arunachaleswarar Temple is an important temple dedicated to Lord Shiva. Located in Tiruvannamalai in Tamil Nadu, this temple belongs to the five Shiva temples dedicated to the five elements of nature. The presiding deity is in the form of Agni Lingam (fire element).

It is significant to the Hindu sect of Saivism as one of the temples associated with the five elements, the Pancha Bhoota Stalas, and specifically the element of fire, or Agni.

The Creator Lord Bramha and Protector Lord Vishnu entered into a controversy among themselves so as to ascertain who was the greatest. Lord Shiva was asked to be the judge. Lord Shiva told them that whoever was able to see his crown as well as his feet would be termed as the greatest.

Then Lord Shiva transformed himself into a Jothi (a column of fire) touching the heaven and earth. Vishnu took the avatar of varaha (wild boar) and dug deep into the earth to find Shiva’s feet but at last accepted defeat.

The thazhambu flower acting as a false witness declared that Brahma had seen the crown. Shiva became angry at the deception and cursed that Bramha should have no temple on earth and that the thazhambu flower should not be used while praying to Lord Siva. The place where Lord Siva stood as a column of fire to eliminate the ego is Thiruvannamalai.

The Annamalai Hill was Agni (fire) during Krithayugam, was Manikkam (Emerald) during Threthayugam, was pon (Gold) during Dwaprayugam and rock during Kaliyugam as per the ancient legends. On the request of Thirumal and Bramha by their devout prayer, Siva who was in the form of a fire column took the form of a Sivalingam at the foot of the hill hwere the Arulmigu Annamalaiyar Temple is located.

Devotees believe that Lord Shiva established himself as Jyotirlinga in the sacred hill behind the Tiruvannamalai temple. So they do Giri Pradkshina around the hill and pray to the god. Devotees cover a distance of nearly 14 km on barefoot and worship at the numerous temples, lingams and shrines that are present along the path.

You can do the Giri Pradakshina at any time on any day. The best time is to start around midnight and complete it by morning 4 am. At 4:30 am there is a special darshan in the temple where they let sacred cow through the temple doors. A lot of devotees also prefer to do giri pradakshina on Pournami (full moon day).

The temple complex covers 10 hectares, and is one of the largest in India. It houses four gateway towers known as gopurams. The tallest is the eastern tower, with 11 stories and a height of 66 metres (217 ft), making it one of the tallest temple towers in India built by sevappa nayakkar (Nayakar dynasty).

The temple has numerous shrines, with those of Arunachalesvara and Unnamalai Amman being the most prominent. The temple complex houses many halls; the most notable is the thousand-pillared hall built during the Vijayanagar period.

How To Reach Arunachalam Temple?

Nearest airport is Chennai (185 km), which offers good domestic and international connections. From here hire a Taxi to Thiruvannamalai.

Nearest railheads are Villupuram (76 km) and Katpadi (65 km), both of which are well connected with the rest of the state and the country.

Tiruvannamali has several hotels and ashrams and it attracts visitors from all over the world Ramanashramam and Seshadri Swami ashram being examples. Each occurrence of a full moon attracts hundreds of thousands of pilgrims.