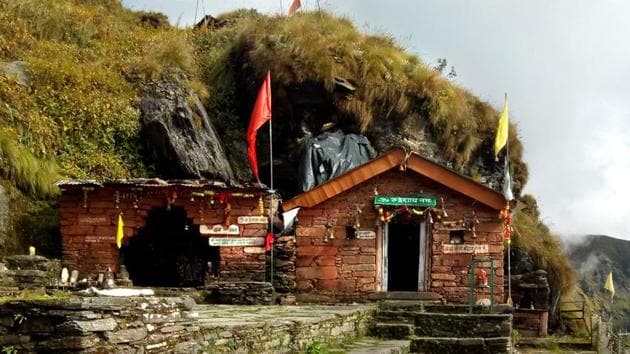 Rudranath Temple is one amongst the Panch Kedar temples dedicated to Lord Shiva which is located in the Grahwal region of Uttarakhand, India.It is the fourth temple to visit in the circuit of Panch Kedar pilgrimage.

The temple is surrounded by the lofty Garhwal Himalayan Mountains and is located at an elevation of 3600 m. It is said that this important Hindu shrine was built in 8th Century AD and is said to shelter the face of Lord Shiva.

Whereas, other parts of his bull incarnation like the hump, is in Kedarnath; arms in Tungnath, navel, and stomach are in Madhyamaheshwar and the hair and head in Kalpeshwar.

Rudranath temple is the toughest one to reach in comparison with other temples of Panch Kedar owing to it’s geographical location.

In order to reach the the temple one will have to cover the distance of around 23 km through trekking to reach here. Hence, trekkers have to trudge through an arduous trek that can only take them to his pilgrimage site in Uttarakhand.

Not limited to this expedition , the temple is also bounded by Surya Kund, Chandra Kund, Tara Kund, and Manas Kund which are the major attractions in Rudranath.

According to the history, Pandavas established the Rudranath temple. Pandavas slew their kin Kauravas during the Mahabharata. Hence, Rishi Vyas advised them to go to Lord Shiva, because only he could absolve them of their sins. However, Shiva kept hiding from them and took the form of a bull.

Then, he went into hiding in an underground safe haven at Guptakashi. Later, Lord Shiva’s body parts as a bull rematerialised at five locations. The Pandavas then built Shiva temples in these five places, popular as ‘Panch Kedar’ .

Rudranath Temple is the place where the face of Lord Shiva appeared. At Nandikund, devotees worship old historic swords protruding from the rocks, believing them to be of Pandavas.

How to Reach Rudranath Temple?

Rudranath is located on Gopeshwar-Kedarnath Road. Nearest airport is Jolly Grant, Dehradun which is about 258 km from Gopeshwar. Taxi and bus services are available from Dehradun airport to Gopeshwar.

Rudranath is located on Gopeshwar-Kedarnath Road. Rishikesh Haridwar & Dehradun all have Railway Stations. Nearest rail-head from Gopeshwar is Rishikesh (241 km approx). From Rishikesh one can take a bus/Taxi to reach Gopeshwar.

Rudranath is located on Gopeshwar-Kedarnath Road. From Rishikesh, the entry point is at Sagar village is 219 km. A 20 km trek from Sagar will end at Rudranath.

Situated in the serene climes of Joshimath, The Tattva is a perfect abode to enjoy the tranquility of nature, the thrill of the mountains and the spirituality of the holy realm.