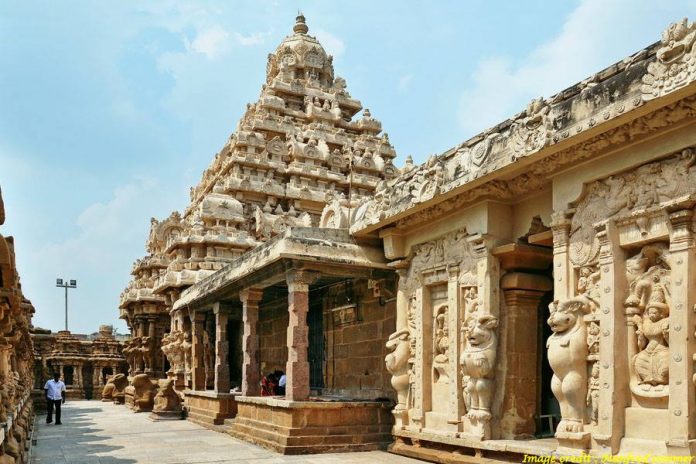 Kailasanathar Temple is dedicated to Lord Shiva, Lord of Mount Kailash, and is one of the most important temples in the city. The large temple complex has 60 smaller shrines, but one of the most unique aspects is the main idol of Lord Shiva, which has 16 strips.

After all, the temple is probably the oldest structure in Kanchipuram and was constructed by the Pallavas dynasty in the Dravidian style of architecture. Located on the banks of the Vedavathi River at the western limits of the Kanchipuram

The architecture of the temple is in the traditional Pallava style with colonnades, a vestibule and a pyramidal tower. There are about 240 carved panels on the temple walls showing the writings of Nagara and Pallava Grantha; Incidentally, some of the earliest works of calligraphy can also be found in the Kailasanathar Temple.

It holds one of the earliest sculptures of Jyeshta Lakshmi (Moodevi) and Vaali as well.  Showcasing Dravidian style of architecture, this place is ideal for meditation and reflection.

The name of the Kanchi Kailasanathar Temple literally means Lord of the Cosmic Mountain and is built in the tradition of the Smartha worship of Lord Shiva, Lord Vishnu, Devi, Surya, Lord Ganesha and Kartikeya.

The temple was built during 685 A.D. to 705 A.D. and is the first structural temple to have been built in South India by Narasimhavarman I, who is also known as Rajasimha Pallaveswaram. His son Mahendravarman III, later on, completed the construction of the temple’s front facade and tower.

Visited by tourists from India and abroad, perhaps the most popular attraction of the temple is the inner-most pathway that runs around the idol of Kailasanathar, signifying the entry of a person’s soul into paradise. Lord Shiva’s vehicle, Nandi (bull god), is also worshipped here.

The temple compound is made of stone, so the best times to visit are mornings and evenings, because the stone heats up under the harsh afternoon sun, and makes walking barefoot a challenge.

How to Reach Kailasanathar Temple ?

The nearest airport is the Chennai International Airport which is 75 kms away.. One can a taxi or Government bus to the temple.

The nearest railway station is Kanchipuram Railway Station which is about 3 kilometers from the temple. One can take a rickshaw or a walk to reach the temple.

Kailasanathar Temple is 3 kms.from Kancheepuram bus stand. Tamil Nadu Government Buses to Kanchipuram are available from all the parts of the Tamil Nadu state and also from major cities in South India.

This hotel is owned by Tamil Nadu Tourist department

Q Where is Kailasanathar Temple?

Kanchipuram, located in the state of Tamil Nadu.

One should visit the temple in the morning hours.