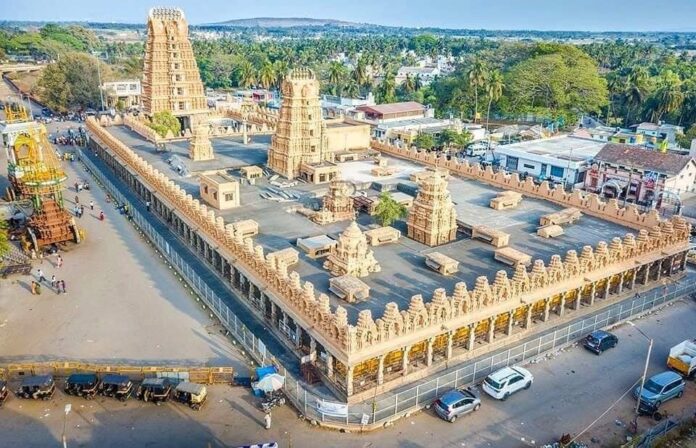 Nanjundeshwara Temple(Nanjagud Temple) also known as Srikanteshwara Temple is an ancient hindu temple located in Nanjanagudu in the Karnataka, India.

Nanjangud is a city also known as the Varanasi of the south.

The huge Nanjundeswara or Srikanteswara temple was built by the Gangas in the 19th century. The temple has many minor shrines like the Narayana with consorts, Chandikeswara, Parvathi, Natya Ganapathi and others.

Nanjungud is mentioned as Sri Garalapuri, in the Shiva Purana. It is said that the legendary holy place is the abode of Lord Shiva in southern India. It is also referred to as Dakshina Kasi. Lord Shiva appeared at the plea of his devotees, the Devas, and Sage Narada.

The demon Keshi, obtained the boon from Lord Brahma and Lord Vishnu, that they shall not be able to kill him. He assumed, with this boon, he is as good as immortal and began troubling the people, the Devas, and the Sages.

Finally, Sage Narada along with the Devas pleaded with Lord Shiva to save everyone. Lord Shiva appeared in Garalapuri Sri Kshetra, (present Nanjungud) and killed the demon Keshi. Lord Shiva assured his Ansh – a part of his divine Self shall always remain here and bless humanity.

Shiva assured this place shall be a ‘papa vinashini’ – remover of sins. Every human praying to Lord Srikanteshwara or Nanjundeshwara (Lord Shiva) of Nanjungud, after bathing in the holy river of Kabini, will be rid of sins and blessed by Lord Shiva. Sage Parashuram, after beheading his mother as per his father Sage Yamadagni’s orders, wanted to undo his sins from “Matr Hatya” – his mother’s murder.

As per the advice of sage Narada, he reached Garalapuri (Nangangud) and prayed to Sri Nanjundeshwara Swamy. Lord Shiva appeared and advised Sage Parashuram to build a Mandap and perform pooja to the Shivling.

While clearing the shrubs with his Parashu – axe, unconsciously Sage Parashuram’s axe hit the Shivling and the tip of the Shivling began bleeding. Sage Parashuram felt very guilty and said, “I have committed another unforgivable sin, only by killing myself I shall be relieved from all my sins”, and prepared to kill himself.

Lord Shiva appeared and blessed sage Parashuram and told him to apply wet mud upon the Shivling (the mud of Sri Nanjangud has immense healing powers). The Shivling stopped bleeding. Lord Shiva advised Sage Parashuram to build the Mandap and continue his Penance.

Finally, Lord Shiva blessed sage Parashuram and relieved him from all his sins, and blessed him with immortality. Goddess Parvati, consort of Lord Shiva wanted to visit this holy place. Lord Shiva brought Goddess Parvati to Garalapuri Nangangud, Devi went to the Kabini river and bent down to touch the water.

A gemstone bead – Mani fell off from her crown into the water. Lord Shiva was pleased and declared, “Devi, until now, the place had my divine blessings and presence, from this moment it shall have your presence, grace and blessings too. It shall also be called Dakshina Manikarnika Ghat”.

During the reign of King Tipu Sultan, his royal elephant became blind. As per the advice of his minister, Sri Poorniya, Tipu Sultan sent the elephant to the Nanjundeshwara Swamy temple and performed 48 days of rituals.

On the 48th day, the elephant’s vision was restored. Tipu Sultan offered the emerald green Shivling as a token of gratitude to Sri Nanjundeshwara Swamy and called Lord Shiva, “Hakim Nanjunda” (healer).

The nine-storied tall Gopura or tower is ascribed to the queen of the Mysore kings, Devarajammanni, wife of Krishnaraja Wodeyar III (1849). The 120ft tower boasts of stucco images, decorations, 7 gold kalashas, each 3 meters tall exhibiting the Dravidian architecture.

Another important centre in Nanjangud is the Raghavendra Math, situated on the road to the right of the Nanjundeswara temple.

It was founded by the close of 15th century and great gurus or heads like Sudheendra Thirtha and RaghavendraThirtha headed this institution. It has a fine collection of Sanskrit manuscripts and copper plates.

The uniqueness of the temple is that it has 66 idols of Shaiva saints called as Nayanmars and more than 100 Lingas (of different kinds and sizes) including the main deity of Srikanteshwara (Nanjundeshwara) Linga.

Next to the Devi deity, in a separate chamber stands the emarald/jade Linga (Pachche Linga in kannada) popularly referred to as Hakim Nanjundeswara; a title given by Tippu Sultan.

It is inscribed in the temple history that on the priests’ special prayers to the deity, eyesight of the royal elephant was restored, where after the Sultan had a linga made of jade along with an emerald necklace and donated it to the temple.[15]

A popular variety of banana locally known as Nanjangud Rasabaley has also made Nanjangud famous all over the region.

The Rathotsava of Nanjundeswara, the ‘big Jathra’ , a ‘chikka Jathra’ (small car festival are some of the festivals celebrated in grandeur in this place. During this time cultural programmes, illumination of the temple, a colourful floating festival (Theppotsava) are conducted.

The chariot festival is held twice every year. The traditional pujas are offered to five idols in different chariots namely Lord Nanjundeshwara, Lord Ganapathi, Lord Subramanya, Lord Chandikeshwara and Goddess Parvathi. After the puja many devotees pull the Chariots throughout the town.

How To Reach Nanjangud Temple

Located at a distance of 15.4 km, the Mysore Airport is the nearest to reach the temple by air. Devotees can get a taxi or drive from the airport to the temple.

The Nanjanagudu railway station is the closest station to the temple and is a mere 12-minute walk.

There are a number of local buses that connect Nanjangud with rest of the Karnataka.