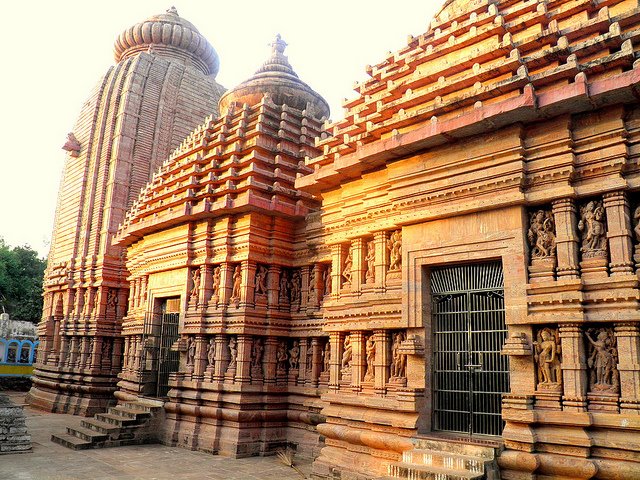 Tara Tarini Temple is a famous Hindu temple dedicated to Adi Shakti on the Kumari hills at the bank of the River Rushikulya near Purushottampur in Ganjam district of Odisha.

The shrine is considered one of the most revered Shakti Peethas & Tantra Peethas and is a major pilgrimage centres of Shakta(Shaktism)sect of Hinduism. It is believed that the shrine is a Shakti Peetha.

The twin goddesses Tara and Tarini are worshipped here. This shakti peeth is also known as Kalyani Dham.

The temple is built using Rekha style of architecture, and Goddess Taratarini was the principle deity of the rulers of Kalinga kingdom.

This ancient temple was built in the 17th century, and you have to take 999 steps to reach the temple, which is atop Taratarini hill or Purnagiri hill. The holy river Rushikalyani, which is believed to be the elder sister of river Ganga, flows at the foothills of the temple.

Mata Sati’s breasts are believed to have fallen here in Tara Tarini. The Shakti of the shrine is addressed as Maa Tara Devi.

In Mahabharata, Lord Krishna and Warrior Arjun prayed to Bhadrkali for strength. The story around the temple and its origination goes back to as old as 250 BCE during the reign of Mauryan King Ashoka.

The Kalingas worshipped Adi Shakti being Hindu and after getting defeated in the war with Ashoka spread Budhhism in this part of the kingdom. The temple has two deities one of gold and one of silver, Devi Tara and Tarini respectively with brass heads.

Daily seva puja is being performed in the temple as per the following established programmes.

Chaitra Parba, also known as Chaitra mela or Chaitra Yatra, is the major festival celebrated here. It is held on each Tuesday in the month of Chaitra, which falls in April-May as per the English calendar.

How To Reach Tara Tarini Temple?

The nearest airport is situated at BHUBANESWAR which is about 175 KM from the temple. Once can take a private taxi to the temple.

BERHAMPUR is the nearest railway station to the temple and is located at about 32 KM from the temple.

Multiple state run buses ply to the temple from various parts of the state.

Places To Visit Near The Temple