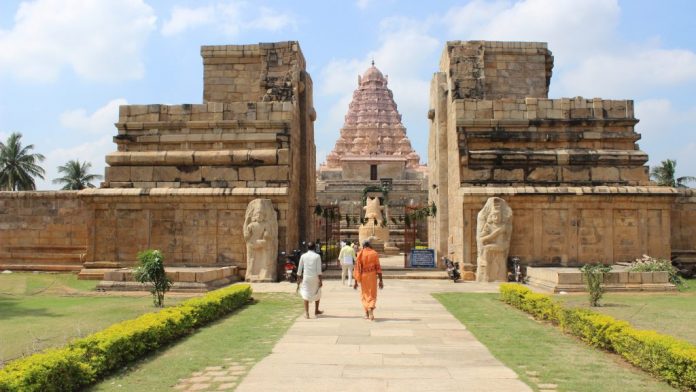 The temple is considered as one of the largest temples in the country and is a fine example of the grandeur of Dravidian style of architecture of the Chola dynasty. The temple was built by Rajendra Chola I and was completed in the year 1035 AD.

Rajendra Chola I built this temple to commemorate his victory in the Ganges region over the Pala Dynasty, hence he  assumed the name of Gangaikonda Cholan, meaning the one who conquered the Ganges.

Brihadisvara Temple of Gangaikondacholapuram is built along very similar lines as the. The entrance to the complex is through a gateway on the east, whose gopura has long since collapsed.

The temple is constructed on an elevated structure along with a courtyard which measures 170 m in height and 98 m in width. The main section of the structure measures 341 ft in height and 100 ft in width with an east-west axis. Like in all other temples, Shiva is represented in the form of a lingam which is 13 ft tall.

The vimanam (temple tower) is 55 m (180 ft) high and  is modeled after   the Bragaadeeswarar temple at Thanjavur.

The most striking difference between the vimanas of Gangaikondacholapuram and Thanjavur is that this one has a concave slope. It is also about 9 meters shorter. Because of its delicate appearance and gentle curve, it is often called the feminine version of the one in Thanjavur.

There are many smaller shrines in addition to the main one, dedicated to attendant deities like Brihadeeshwara’s consort Goddess Brihannayaki, Lord Ganesha, Chandikeshwara and others.

A circular well guarded by a lion stands to the northeast of the vimana. It is called Simhakeni. The lion is believed to have been added in the 19th century, but the well has been around from Rajendra’s time. Apparently, he even had some water from the Ganga poured into it. A huge stucco nandi or bull faces the main shrine.

Ramappa temple is located at a distance of nearly 70 km from Warangal city and is accessible by road.

This temple is a UNESCO World Heritage Site in the southern state of Tamil Nadu, India which belongs to the category of “Great Living Chola Temples” . It is one of the prominent tourist attractions of Tamil Nadu.

The lingam here is considered as the largest one to be found at any temple. The idol of Nandi is sculpted in such a way that it reflects the sunlight to the sanctum.

The Nandi is sculpted in stucco and fallen stones, a stone known as Chandrakanta is said to have been laid in the sanctum, which helps the area remain cool during summers and warms the area up during the winter season.

How to Reach Brihadisvara Temple ?

Trichy Airport is the nearest airport which is located at about 138 km from the temple. One can be travel by bus or cab from Trichy.

Ariyalur Railway Station is the nearest railway station which is located at about 50 km from the temple. One can be travel by bus or cab from Trichy.

There are multiple accommodations to stay nearby the temple.

ABOUT DILWARA TEMPLE AT MOUNT ABU