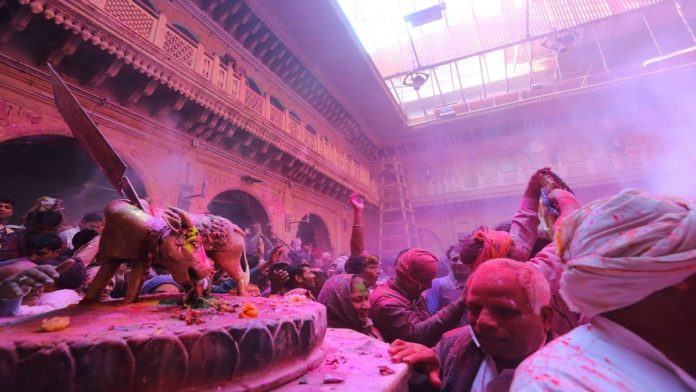 Shri Bankey Bihari Mandir is a Hindu temple dedicated to Lord Krishna, in the holy city of Vrindavan in the Mathura district of Uttar Pradesh.

The Bankey Bihari Mandir, Vrindavan is amongst the holiest and famous temples of Krishna in India. Shri Swami haridas got Bankey bihari ji appeared in Nidhivan. The idol of Thakur Ji is much older and was worshipped in Nidhivan till 1863. This temple was constructed in 1864 with the contribution of Goswamis. After constructing of temple, Goswamis transferred the idol to this temple. Bankey means “Bent at three places” and Bihari means “Supreme enjoyer”. Bankey bihari ji is worshiped and looked after as a child. There is a different and unique style of celebrating every festival in Bankey bihari temple. The deity is dressed up and offered cuisine (bhog, prasad) according to season. Temple is decorated with lights and various types of flower according to festival. There are no bells or conch in the temple because Bankey Bihari does not like the sound of bells or conch. there is only chant of ‘radha naam’. When someone enters in the temple, he feels an eternal bliss and calm and forgets all misery. As soon as someone meets with Thakur ji, he becomes dedicating himself to Thakur ji. Kind hearted Thakur ji demolish his problem and bless him with His divine grace how far he is.

The image of Bihariji installed in the Shri Banke Bihari Mandir, is the one granted to Swami Haridas by the celestial couple Shyama-Shyam themselves. Submitting to the desire of devotees The Lord appeared in person with his divine consort and left back a black charming image before disappearing.

The temple is surrounded with a lot of thief Monkies who steal your belongings and ask for food instead so be very careful with your stuff.

The nearest airport is Agra just 67 km away from Vrindavan. The nearest international airport is Delhi, which is connected to almost every important city in the world with major airlines. There are regular flights to other important tourist destinations of India such as Delhi, Mumbai, Bangalore, and Chennai etc.

Vrindavan is situated on Delhi-Agra NH-2. the various buses runs between the Agra and Delhi. temple is 7 km. away from National Highway. Getting to Temple is very easy as there are frequent tempos and rickshaw available throughout the day. Mathura is just 12 km away. frequent buses, tempos and taxies runs between Mathura and Vrindavan.

The major railway station nearby is Mathura on the Delhi-Chennai and Delhi-Mumbai main line. Several express and passenger trains connect Mathura from other major cities of India like Delhi, Mumbai, Pune, Chennai, Bangalore, Hyderabad, Calcutta, Gwalior, Dehradun, Indore, and Agra. Though Vrindavan itself is a railway station. A rail bus runs between Vrindavan and Mathura 5 round in a day.

Situated 3.9 KM from Banke Bihari Mandir. Banke Bihari Temple is 10 min away in a tum-tum or autorickshaw and normally its available easily thru out the day.

Situated 10 KM from Banke Bihari Temple. We loved this hotel! Only 10 min walk to Holi Gate, which is also where the market street is on your way so you can buy whatever you need and it’s so much less expensive than if you’re in a more touristy area.

Situated 2.1 KM from Bankey Bihari Mandir. The hotel is located near to the Banke Bihariji temple but is situated in a narrow lane. The room was elementary with very basic amenities.

Situated 3.7 KM from Banke Bihari Temple. This was one of my best hotel to stay in Vrindavan however some time it disappointed you. The rooms were tidy and there is a smell in toilets which makes it unbearable to stay.

Sri Bhramaramba Mallikarjuna Swamy Temple, in Srisailam, is one of the twelve Jyotirlingas of Lord Shiva also one of the 18 Maha...
Read more
TEMPLE

Shri Omkareshwar Jyotirlinga Temple is a Hindu temple dedicated to God Shiva located in the Indian state of Madhya Pradesh. It is...
Read more
TEMPLE

Baba Baidyanath Dham is a hindu temple and also one of the twelve Jyotirlingas, the most sacred abodes of Shiva. It is...
Read more

The story goes that the Aranmula Sree Parthasarathy Temple had its idol brought here in a raft made with aru (six) pieces...
Read more