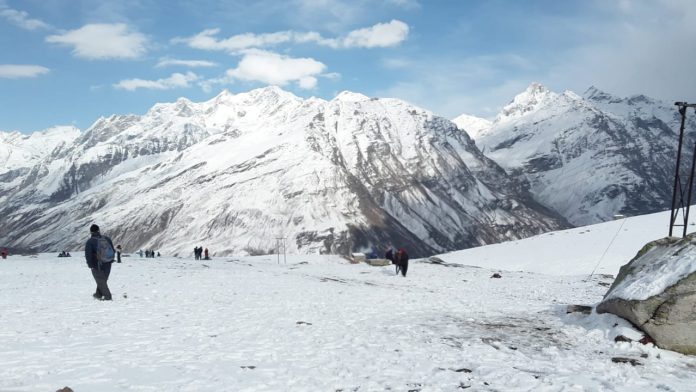 Kullu Manali is a really popular hill station and a tourist destination in Northern India. It is located in the Indian state of Himachal Pradesh. It is a rustic enclave known for its cool climate and snow-capped mountains, offering respite to tourists escaping scorching heat of the plains. The tourism industry in Manali started booming only in the early 20th century, mainly because of its natural bounties and salubrious climate.

The glacial water of River Beas after rushing down the slopes of Rohtang Pass allows adventure sport activities of rowing, white water rafting and river crossing as it meanders through the valley from Manali to Kullu. The open valley with terraced fields dotted with hotels and resorts has tourists converge on this township in summer from April to July and in autumn to early winter from October to December.

On a meandering uphill road, 51 km away from Manali, Rohtang Pass is an ace tourist attraction that elevates your travel experience. The pass gives summer access to the land of Lahaul and Spiti. Heavy snow closes the pass in late November which after much effort is again opened six months later by May.
As the summer picks up and snow starts to melt, tourist vehicles start making a beeline to the Pass to experience snow in the months of June to August.

A dense forest of deodar, kail, walnut and maple trees that shelters a lot of shy Himalayan wildlife is a great getaway for nature lovers. The sanctuary starts about 2 km from Manali. A bridle path darkened by the dense forest cover takes you past Dhungri temple to Gallant thatch. The alpine grassland and glaciers beyond Gallant thatch is a great camping site to observe the wildlife around.

Overlooking the valley from high up on the left bank side of the Beas River, Naggar, 22 kms from Manali, served as the capital of the principality before it moved to Sultanpur, Kullu in 1660 AD. Many monuments and temples along with a 500 year palace castle scattered around Naggar bear testimony of the importance the place once held.
It has become popular tourist attraction on the periphery of Manali.

Adventure Activities To Do:

River Rafting: The challenge of surviving through the wicked twists and turns of the rapids will quench your thirst for adventure in Manali. Before starting, the rafters are given a brief introduction and made wary of the lurking dangers. This is amongst the most loved adventure activities in Manali. It can cost about 2500 INR for 2 person.

Paragliding: Surf along majestic mountains and get intimate with deep blue skies while paragliding in Manali. One must possess nerves of steel to make the initial jump, after all it is considerably one of the most challenging adventure sports in Manali. Can cost you about 1000-2000 INR.

Skiing:Enjoy your snowy rendezvous with skiing, at the famous Solang Valley near Manali. One of the most sought-after adventure sports in Manali, Skiing is offered along with prior assistance and sessions. One can also go Skiing in Rohtang, Marhi, Gulaba and Dhundi, but there is a good chance that the experience of skiing in Manali will reign supreme. You can easily rent the equipment from the nearby shops.

Trekking is one of the most thrilling sports to try out anywhere. Manali is one destination in the country that never fails to impress in this context. The innumerable trekking trails that Manali has to offer is extraordinary. Be it the snowy mountains of the Himalayas or the lush greens of the jungles, Manali is idyllic to escape the hustle and bustle. Solace and solidarity that exudes from this destination is unmatchable. Advisable trek for beginners Tosh Valley Trek, and Kheerganga Trek.

Bungee Jumping is an adventure sport that one can try out 5 kilometers from Manali, in Bahang. While Manali did offer bungee jumping in the early days, the hill was shut down. But this adventure sport can still be enjoyed by those visiting the place as the spot is in the proximity. Just imagine leaping into nothingness, with a massive bundle of green trees down below, forming your view of several hundred -shades cost about 800-1500 INR.

The nearest airport is at Bhuntar, located approximately 50 kilometres away from Manali. Domestic flights connect Bhuntar with Delhi and Chandigarh. Once at the airport, you can take a pre-paid taxi to Manali. However, owing to weather conditions, flights are not the most reliable option for getting to or out of Manali.

Jogindernagar railway station is the nearest railhead to Manali that connects the hill station with several important cities of the country. Chandigarh and Ambala are other options to reach Manali by train. From the railheads, one can get several mode of transportation including taxi and bus at reasonable cost.

The drive up to Kullu Manali is simply breathtaking! You can catch scenic glimpses of the adjoining mountains and valleys from almost every turn that the twisty uphill road throws you in. Though a lot of tourists prefer a self-drive up to Manali, it is advisable to hire a taxi in case you are not comfortable with driving in mountainous regions.

Manali is very well-connected to important tourist destinations like Leh, Shimla, Kullu, Dharamshala and New Delhi by means of a network of state-run as well as private buses. The bus journey from Delhi to Manali is 550 kilometres, and it is advisable to book your tickets in the air-conditioned Volvo coaches, as the buses are more comfortable than ordinary ones, keeping in mind the long distance of the journey.

Known as the Dhungri Temple, this temple with the presiding deity of Kullu Manali is in close proximity of the town center Mall Road. Built on a strong stone foundation, the temple shikhar rises as high as deodar trees surrounding it in a four-tier pagoda style wood and stone structure. The temple dates back to the 16th century.
The temples sanctum sanctorum is a cave shrine that is believed to have foot imprints of Hidimba Devi. The Hindu epic Mahabharata has Hidimba as one of the wives of Bhima, one of the five Pandavas princes in the story. Manali is perhaps the only place in India where she is worshipped as a goddess. The temple attracts devotees and architecture lovers from around the world.

Jammu and Kashmir was a region formerly administered by India as a state from 1954 to 2019, constituting the southern and southeastern...
Read more
TOURIST PLACE

Travel while you’re still young. Lose yourself to find your own self. Live like there’s no tomorrow. And whatever you’ll explore today...
Read more

The story goes that the Aranmula Sree Parthasarathy Temple had its idol brought here in a raft made with aru (six) pieces...
Read more