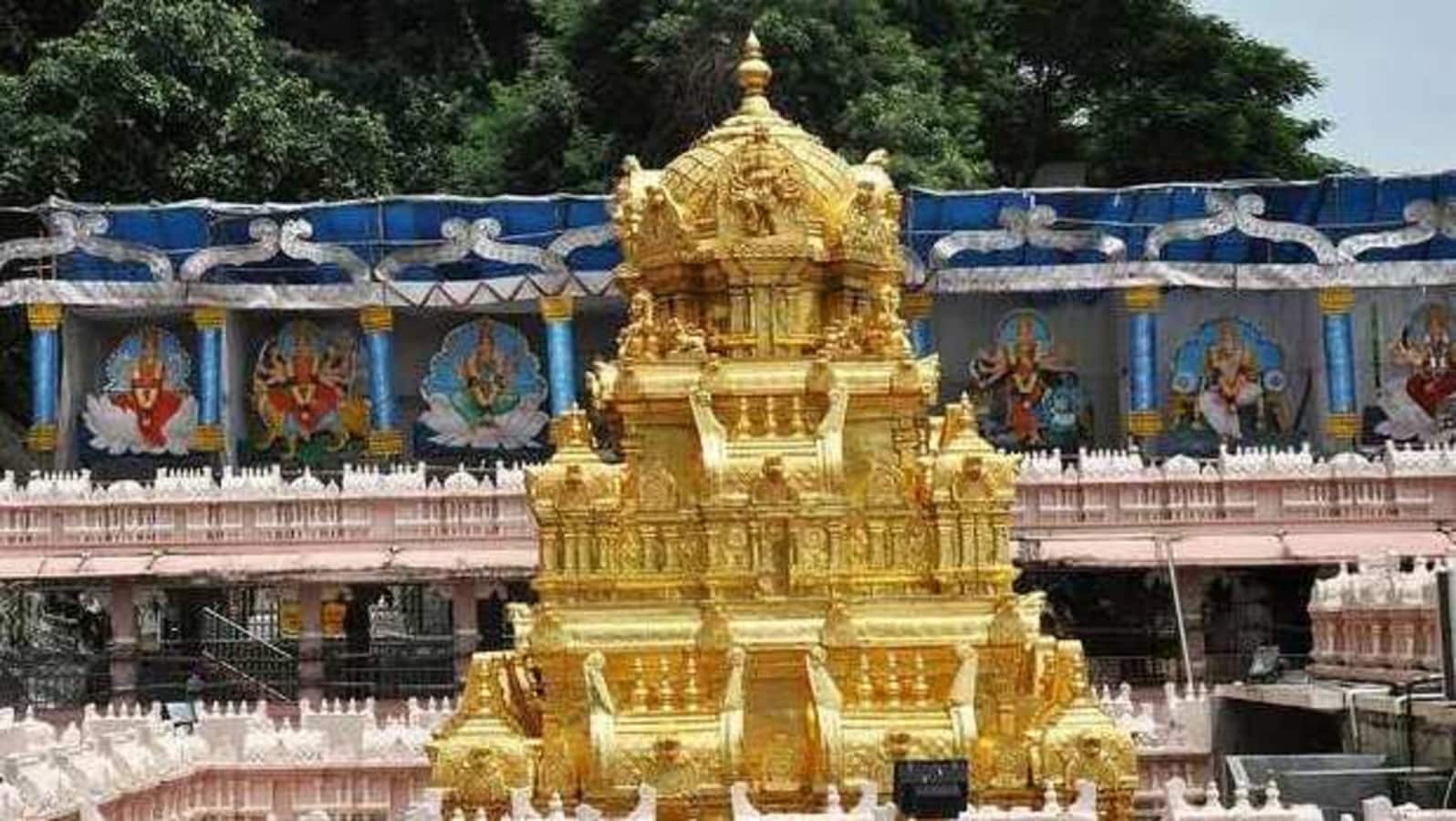 Temple commonly called as Vijayawada Kanaka Durgamma Temple. in the Krithayuga goddess Durga killed Mahishasura who was a disaster for World. Then goddess Durga shined on the Keela mountain with eight arms in the form of MAHISHASURA MARDINI as she had given boon to keela.

History of Kanaka Durga Temple The temple of Kanaka Durga the Goddess of power, riches and benevolence and the presiding deity of Vijayawada, is swarmed by lakhs of pilgrims for worship during the “Navarathri” festival which is celebrated with Religious fervour, pomp and festivity.

The small but ancient temple of Kanaka Durga , a top the Indrakeeladri hill on the banks of the Sacred river Krishna in Vijayawada abounds with legends of historical interest.

The temple of Devi Kanaka Durga has more than one legend about its origin and history. One legend says that this region was once strewn with mighty rocks which inhibited the flow of the Krishna River, thereby leaving this area uninhabitable.

To put an end to this problem, Lord Shiva was called upon who directed the hills to make way for the unobstructed flow of the river. The flow of the river gained strength through the tunnels or “Bejjam”, and hence the name Bezawada was born, which later got modified to Vijayawada.

Another myth claims that Arjuna prayed to Lord Shiva on the top of the Indrakeela Hill for winning his blessings and he was successful in passing the test that Lord Shiva had posed for him and gifted the middle Pandava with Pasupat weapon, and hence the name Vijayawada was coined.

The most famous one obviously has Goddess Durga at its centre. It has two versions. One follows that the goddess visited the mountaintop where the temple is perched upon being worshipped and called by sage Indrakila, who is the inspiration behind the name of the hill range.

The sage was tormented by the increasing menace of demons, led by Mahishasura and Durga responded to his plea, slew the demon king and made Indrakeeladri her permanent abode.

Another one is that a Yaksha by the name Keela got a boon from Devi Durga that she would always remain in his heart.

Granting him the boon, she said that he would be a mountain and she would perch in the temple nestled within the mountain range when the time comes. After killing Mahishasura, she kept her promise and made her home at Indrakeeladri.

The main sanctum’s construction is in the form of a pyramid, with the surface embellished with delicate stone carvings.

The most impressive aspect of the Kanaka Durga Temple is perhaps its golden crown, which can be spotted from miles away. Visit this destination for a soul-stirring experience.

There is also a Lord Shiva shrine near the ancient temple premises that goes by the name Malleswara Swamy temple.

This temple is probably the only one in the world where the female deity is located on the right side of the male one, as against the tradition left-side seat of the female consort.

This is significant as this actually shows that the Shakti or feminine power of the cosmic universe is predominant here. These two shrines are obviously the centre of attraction for anyone visiting the temple.

The nearest domestic airport in Gannavaram which is located at about 20km from the city) Auto rickshaw and taxi are available to reach the temple.

APSRTC runs frequent buses from Hyderabad, Kammam, Tirupathi, and Warangal.Bus Stand and Ratham centre for every 15 minutes. If you are in Vijayawada, you can avail the local transportation to reach the temple. The city is served by NH 5 and NH 9 which connects it to cities.