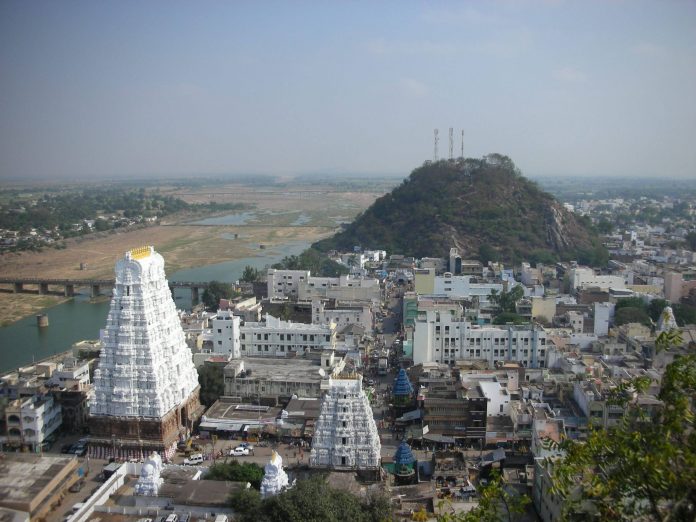 Srikalahasti Temple also known as SriKalahasteeswara temple is one of the famous Lord Shiva temples located in Chittoor district of the Rayalaseema region of Andhra Pradesh.

This temple is one of the Panchabhoota Sthalams, representing wind. The temple is also regarded as Rahu-Ketu kshetra and Dakshina Kailasam.

Three hills surround the Srikalahasti Temple – Durgambika in the north, Kannappar in the south and Kumaraswamy in the east. This famous pilgrimage destination is along the banks of the Swarnamukhi River.

The name of Srikalahasti Temple is derived from a famous mythological legend. The myth states that a spider (Sri), a snake (Kala), and an elephant (Hasti) used to worship Lord Shiva in the town to attain Moksha.

According to the Hindu legend, Brahma had worshipped Kalahatiswara at this place during all four of the Yugas. The Pandava prince during the Mahabharata, Arjuna, is believed to have worshipped the presiding deity sitting here.

The hunter who turned into an ardent devotee of Shiva accidentally, known as Kannappa, is also associated with the Srikalahasti Temple. The works of Nakkeerar, and the Nalvars namely Appar, Sundarar, Sambandar, and Manickavasanagar also find their mention in the temple in the canonical works of Tirumura.

A ghost named Ghanakala also prayed here for 15 years following a curse. After he recited Bhairava Mantra many times, Lord Shiva regained her original form. Lord Shiva tested the devotion of Thinnadu before the sages accumulated at Srikalahasti. Shiva created a tremor that caused the top of the roof to fall.

The temple is classified as Paandal Petra Sthalam as it is respected and revered in Tevaram. It is one of the two hundred and seventy-five temples that find mention in the Saiva canon.

The Lingam of the Srikalahasti Temple is white in colour.
The significance of the temple is that the Linga is white in colour and even the priest does not touch it. This ancient temple is also considered as the Kailash of the South or Dakshin Kailash.

Srikalahasti Temple has two major shrines for Lord Shiva and Parvati. A small shrine, Dakshinamurthy, is for the Guru of Lord Shiva. Additionally, there are many other deities for Venkateswara, Vinayaka, Nataraja, Surya and replica of Lingas of famous Shiva temples from all over India.

Pallava dynasty started Srikalahasti Temple’s construction during the 5th century. The Chola and Vijayanagara kings provided great assistance to the development of this temple. Around the 10th century, the Chola kings renovated the main shrine and constructed the main temple.

The Srikalahasti Temple is a beautiful illustration of the Dravidian Style of architecture that was built during the Pallava period in the 5th Century. The temple complex is located at the base of a hill. Some even believe it is a monolithic structure. The grand temple complex has its entrance facing the south, while the main shrine faces the west. The white stone Shiva Lingam inside this shrine resembles the shape of an elephant’s trunk. The main gopuram of the temple is about 120 feet high.

The mandap in the temple complex has 100 intricately carved pillars that were built during the reign of a Vijayanagara King, Krishnadevraya, in 1516. The shrine of Lord Ganesh in the complex is a 9 feet tall rock-cut shrine.

The nearest airport to the Srikalahasti Temple is the Tirupati Airport, which is just twenty-five kilometers away. There are daily flights to Tirupati from Hyderabad, Delhi, and Bangalore.

There is a railway station at Sri Kalahasti. It is well connected to all the cities in the Southern region of India directly. There are trains from cities like Hyderabad, Kolkata, and Vijayawada.

It takes approximately five hours from Bangalore to Tirupati by road. There are state transport buses like KSRTC and APSRTC which operate during the day and night. APSRTC buses run every half an hour to Tirupati. It also offers a special package called Yatra darshini and Divyadarshini.

This is a temple trust accomodation .