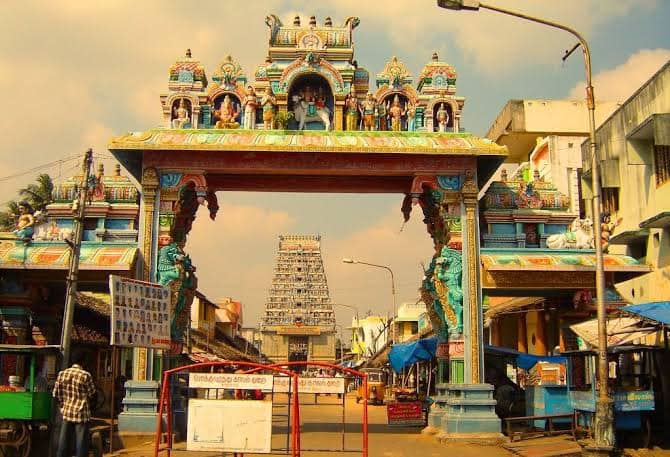 Thirunallar Temple also known as Thirunallar Saneeswaran Temple is one of the Navagraha Temples, where the presiding deity is Lord Shiva but the temple is known for Lord Saneeswaran [Saturn] who is the doorkeeper here for Shiva and is located at Thirunallar, Tamil Nadu. It is believed you can only see Lord Shiva after seeking bessing from Saneeswaran.

Legends says that the legendary King Nala was relieved of his afflictions caused by the malefic influence of Planet Saturn or due to Shani Dosha, after worshipping at Thirunallar Saniswaran Temple and taking a holy dip in the temple tank.

The sacred temple tank is named Nalan Theertham and it is believed that by bathing here, one wash off all kinds of afflictions and misfortunes caused by one’s past karmas.

According to history, in the 7th century C.E. when Jainism was spreading in influence in South India, the Pandian King Ninra-seer-Nedumaran who was ruling Madurai was converted to Jainism.

Soon, everyone in the Pandian Kingdom embraced Jainism, forsaking the old religion except the Queen Mangaiyarkarasi and Minister Kulacchirai Nayanar who were staunch Saivites.

Distressed with this, the Queen and the Minister were yearning to reclaim both the King and the Kingdom back into the fold of their traditional religion, Saivism.

At that time, there came the news of the camping of a young Saivite saint Tirugnana Sambandar at Vedaranyam. The Queen and the Minister heard the miracles performed by the young saint in the Tanjavur district that they sent an urgent invitation to him to visit Madurai and free the King and his subjects from the clutches of Jainism.

The arrival of the Saivite saint provoked the Jains that they set fire to his holy dwelling. But by his yogic powers, Saint Sambandar had the heat transferred to the King Ninra-seer-Nedumaran, who as a result suffered in agony.

The name “TIRUNALLARU” represents the association of Nala, King of the Nishadha country who got his deliverance from the evil effects of Saneeshwaran (Saturn) by invoking the Lord’s mercy here. (Nala+Aru-Nallaru).

The word “Aru” also conveys the meaning “to heel” and the two words taken together will mean Nala’s place of redemption or the place where Nala secured his redemption from the hold of Saturn through the Lord’s Grace.

Others are inclined to read the meaning ‘between rivers’ in the name Nallaru, as this place is situated in the midst of two rivers in the north i.e. Noolaru and Vanchiaru, and one in the south, Arasalaru.

The nearest Domestic Airport is located in Trichy (Trichirapalli) which is about 150 km from the temple. One can take a taxi or a bus to the temple after reaching the airport.

The nearest Railway Station is Karaikal which is around 6 km from the temple. Taxis, Auto-rickshaws can be taken to reach the temple.

Dormitory type residing hall is also available at a charge of Rs. 30.00/- per person.