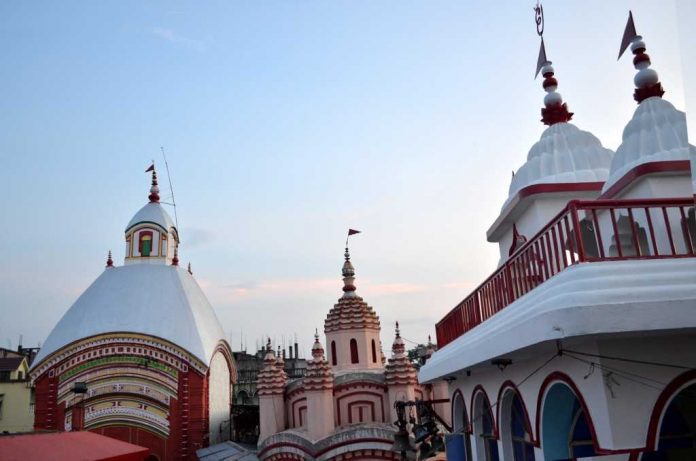 Tarapith Mandir (Tarapith Temple) is a small temple situated on the banks of the river Dwarka that flows through Birbhum, West Bengal.

This ancient temple is considered exceptionally auspicious by the members of the Hindu community and is one of the 51 Shakti Peeths. It is considered to be a haven for the practitioners of Tantrism.

According to the legends, when Lord Shiva’s wife Goddess Sati committed suicide by jumping into the ritual fire.

Shiva roamed the entire universe moaning her loss. It is believed that one eyeball of Sati fell right here in Tarapith.

The village was earlier called Chandipur, but later its name was changed facing Tarapur or Tarapith because the Bengali word for eyeball is Tara.

Thus, the temple is dedicated to Ma Tara, who is believed to be the second out of the ten goddesses of great wisdom.

She is also called Kalika, Bhadra-Kali, and Mahakali. She is worshipped as the tantric depiction of Goddess Durga. The temple is a spiritual and an architectural wonder. If you come looking for peace and miracles, this is the place for you.

A time ago, sage Vashisht, one of the seven holy sages, walked the face of this earth in flesh and blood. He was an ardent devotee of Goddess Tara and worshipped her day and night However, to his dismay, despite worshipping the Goddess for days at a stretch, he was unable to get her darshan’.

Finally, the divine intervened and the sage was asked to visit a site in Rampurhat and meditate on the Goddess at the cremation ground there. There, the goddess showed her divine self to the sage.

And after the vision was granted, she turned herself into a stone image so that she could be worshipped by all and sundry. Because of the blessings of Maharishi Vashisht, and the divine presence of Ma Tara, this place is known for its wish-fulfilling abilities.

Tarapith Mandir is also famous for a saint named Bama Khepa, also known as the mad saint, who is held in great reverence here. His shrine is located in the vicinity of the temple in Birbhum. He was a great worshipper of Ma Tara who devoted his entire life to her service.

He lived and meditated in the cremation grounds near her temple. Bama Khepa is said to have perfected yoga and Tantric worship and rituals under the guidance of Kailashpathi Baba who was an extremely famous saint there.

People from all over the country used to come to him seeking help with illness and distress. He was a controversial figure of his time and was disliked by the temple priests because of his unusual behavior.

He was even roughed up by them once for taking food meant for the deity. It is believed that after this incident, the Goddess Tara appeared in the dream of the Maharani (Queen)of Natore and asked her to feed the saint first as he was her son.

After his incident, Bama Khepa was fed before the deity in the temple and nobody stopped him.

According to the legend. Ma Tara appeared in front of Bama Khepa in her ferocious form and later took him to her breast.

Architecture of the Tarapith Mandir

The main temple is a marble block structure which has four sides covered with a curved roof known as a dochala. There is a smaller tower with four sides coming out from beneath this structure having its own dochala.

Tarapith Mandir has a thick base with thick walls composed of red bricks. The deity’s image is kept in the attic in the chamber. There is a stone image of Maa Tara in the form of a mother suckling Shiva.

Another three feet metal image of Maa Tara is presented in her fiery form with four arms wearing skulls all around her neck in the form of a garland and her tongue sticking out. The image has a silver crown over its head with flowing hair.

The image is wrapped in a sari and decorated with garlands having a silver umbrella over its head. The forehead of the deity is decorated with red kumkum. This kumkum is applied on the foreheads of the devotees by the priests as a symbol of Maa Tara’s blessings. The devotees offer bananas, silk saris and coconuts to the deity.

Pooja takes place in the afternoon where rice is offered to the deity as a part of the Tantric rituals. The Anna Bhog that is served after this Puja consists of rice, the meat of the sacrificed goat, rice pudding, fried fish, and five kinds of dishes.

After the Anna Bhog, the temple shuts down for a few hours to allow the deity to relax. In the evening, the Sandhya Aarti begins post which it is time to make deity’s bed.

Goats are bathed in the holy tank before sacrificing them for the deity. Their neck is cut in a single stroke and their blood is collected in a small vessel to offer to the Goddess.

Other festivals, besides the Durga Puja, that are celebrated here include Sankranti Mela, that is held on every Sankranti day of the Hindu month coinciding with 14-15 January on the Gregorian calendar, Dola Purnima, which is organized during February/March,

The cremation ground near the temple is one of the most mysterious places in India. The place is covered by trees and forests and has a river flowing through it. Here, you will find many ash-smeared tantric performing their tantra-puja and rituals on the cremation ground.

It is believed that goddess Tara wanders here and drinks fresh blood of the sacrificed animals lying on the cremation ground.

The practitioners of Tantrism here believe that the cremation ground is the natural abode of the Goddess because she is attracted to bones, skulls, and blood.

They have built their huts here and decorated them with human as well as animal skulls like those of jackals and vultures that have been deemed unfit for Tantric rites. Some huts even have snake skins decorating them.

If you are especially curious about this place you can pay it a visit but the girls are generally asked to stay away from the cremation ground.

How to reach the Tarapith Mandir?

The nearest airport Netaji Subhas Chandra Bose airport is at Kolkata. One can avail taxi or bus services from airport to reach Tarapith.

The state owned and private buses connect Tarapith with Esplanade / Dharamtala bus stand of Kolkata and with the neighboring cities of the state.

One thing that is generally accepted nation over is...