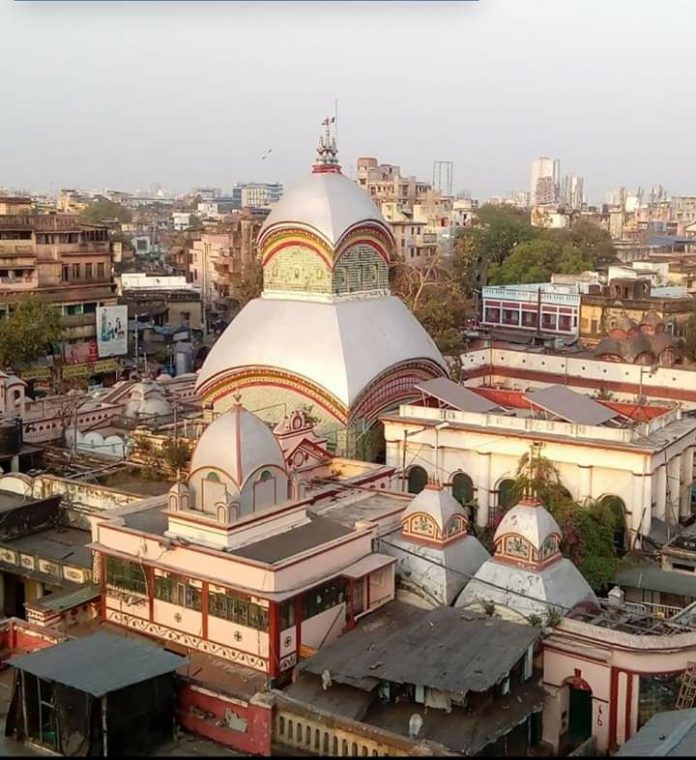 Kalighat Temple is a hindu temple dedicated to Goddess Kali and is situated on the banks of the Hooghly river (Bhagirathi), Kolkata, India.

Kalighat Kali Temple is being regarded as one of the most important Shakti Peeths out of 51 peeths that are spread across India.

It has been in existence for centuries but the present form was built around 1809 A.D. In due course of time the river changed its course and the temple is now on the banks of a small canal called “Adi Ganga”.

The image of Kali in this temple is unique. Three huge eyes, a long protruding tongue made of gold and four hands, which are all made of gold too. Two of these hands holding a scimitar and a severed head of “asura” king ‘Shumbha’.

The other two hands are in ‘abhaya or varad mudra’ or blessings ,which means her initiated devotees (or any one worshipping her with a true heart) will be saved as she will guide them here and hereafter.

Kalighat’s earliest history can be gauged from the coins originating from Gupta period{4th to 5th AD} that were discovered here. Kalighat was earlier known as Kali-Kshetra.

Out of the many legends associated with the Kalighat Kali Temple, the most talked about is of the Brahmin named Atma Ram, who found a human toe shaped stone structure in the Bhagirathi River.

It is believed that he was guided by a ray of light that appeared to be coming from the direction of the river.

The Brahmin prayed to the piece of stone that evening and had a dream the same night wherein he was informed about Sati’s toe that had fallen in the river and that the stone piece he found was nothing else but Sati’s right toe.

He was asked in his dreams to set up a temple and also search for a Swambhu Lingam of Nakuleshwar Bhairav, which he eventually did. Atma Ram later started worshipping both Swambhu Lingam and the toe shaped stone.

It is believed that the temple was initially built by Raja Mansingh I of Amber (AD 1594 – 1606)  when he was sent as a Governor of Bengal by Mughal Emperor Akbar.

In 1809 this temple was modified  and reconstructed by an affluent Zamidar named Santosh Roy Chaudhary of Sabarna Roy Caudhary family under the patronage of Kaliprasad Dutta.

The Temple Premises comprises of the following:-

How To Reach Kalighat Temple?

Netaji Subhash Chandra Bose International Airport is the nearest airport which is around 25 kilometres from the temple.

Howrah Junction is the nearest Railway station that is connected to all major cities in India via rail network. One may either hire a cab or travel by local or mini bus to reach the temple.

Any buses that goes towards South Kolkata would take visitors through the Shyama Prasad Mukherjee Road, which is off the temple road.

One needs to get down at Kalighat bus station and walk down the Kali temple road towards the temple.