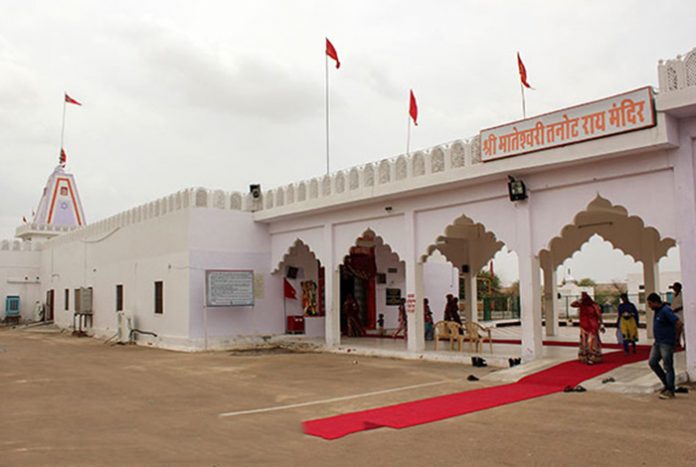 Tanot Mata Mandir(temple) is a hindu temple dedicated to Goddess Aavad, the daughter of Mamadia Charan who is worshiped as Tanot Mata and is located western state of India in District Jaisalmer of Rajasthan.

This temple is linked to the 1965 Longewala War. When the Pakistani Army threw roughly 3000 bombs on the temple, however none of them exploded.

The Pakistani Force was stunned, and after the battle, a Pakistani General questioned about the incident, and after learning of the strength of the temple that appeared to defend the area, he requested to see it.

The Pakistani General was granted his request, and he proceeded to the temple to pay his thanks and acknowledge the miraculous event. On the request of the temple management, the temple was handed over to the Indian Border Security Force (BSF) after the war.

There are some places that have a lot of elegance but are rarely visited due of their surroundings. Tanot Mata temple is a hidden gem located in Rajasthan’s Jaisalmer area, close to India’s border with Pakistan.

It is well known for its representation in the Bollywood film Border, which is based on the 1971 Indo-Pakistan conflict. Despite the massive bombardment all around it, the temple stood firm, a reflection of its spiritual ethos and powers. This temple has an air that makes visitors feel as if they are in the presence of a holy deity who has protected Tanot to this day.

How To Reach Tanot Mata Mandir?

Jaisalmer Airport is the nearest airport which is located at about 120 KM from the temple. Buses and taxis are available outside the airport for smooth travel.

Jaisalmer railway station is the nearest one to the temple which is about 123 km from the temple.