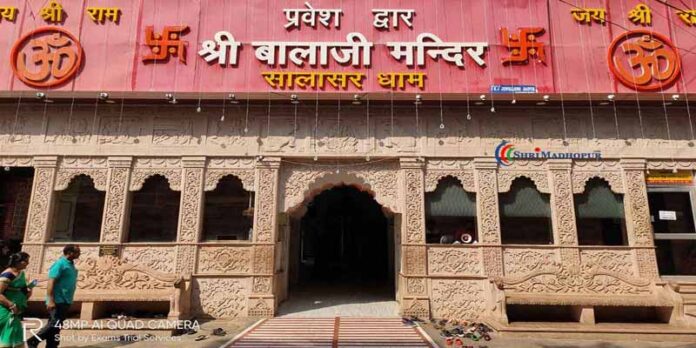 Salasar Balaji Temple or Salasar Dham is a hindu temple located in the small town of Salasar near Sujangarh in Churu district, Rajasthan . Dedicated to Balaji which is another name for Hanuman Ji , this temple attracts innumerable devotees throughout the year.

Salasar Dham is in a religious circuit of centers of Khatu Shyamji temple and Rani Sati Dadiji (Jhunjhunu) temple and the Salasar Dham (or Balaji). All are located at a close proximity to each Other.

There are numerous stories associated with the Salasar Balaji Temple and how it came to be.  One such popular story dates back to 1 Saturday of Shravana Shukla, of Navami Samvat (1754 AD), once a Ginthala Jat farmer of Asota village in Nagaur unearthed a stone idol of Balaji while plowing his field.

The news of this discovery shortly unfold throughout the village and reached the ears of the Thakur of Asota. it’s said that the Lord Balaji appeared in Thakur’s dream, asking him to send forth the idol to Salasar in Churu district.

It was on the same night that Mohandas Maharaj, a Hanuman devotee in Salasar, dreamt of Balaji too.

Mohandas sent forth a message to the Thakur of Asota, who was highly surprised to learn of all the tiny details that the prior had mentioned, without having visited Asota.

The idol was then consecrated at a place that’s currently recognized as Salasar Dham. As per another version of identical story, the Thakur of Asota once having the dream, ordered for the statue to be captive to Salasar and placed within a temple.

For shifting the idol, the Thakur purchased 2 bulls tied to a cart. it absolutely was determined that a temple would be engineered on the spot where these bulls would stop.

Once the Salasar Balaji Temple was made, several traders and villagers moved to create their homes near to it, therefore forming a village that is currently recognized as Salasar.

The Salasar Dham temple was created after a divine dream in which Balaji himself commanded Mohandas Maharaj to construct a temple for his idol. He built an initial mud-stone temple with the help of Muslim artisans Noora and Dau of Fatehpur Shekhawat.

The temple was later rebuilt in concrete with the help of the successor of Sikar Jagirdar Rao Devi Singh.

Later, Mohandas’ descendants Kaniram and Ishwardas developed and renovated the temple and gave it the present form of a giant temple complex.

The Sabha Mandap (prayer hall) and the Sanctum Sanctorum (garbha griha) are covered with artistic works of gold and silver, and the parikrama path is made from white marble. Various utensils used in puja, doors and vestibule are also made up of silver.

The Sanctum Santorum has beautiful floral decoration and mosaic works both done in gold and silver.

The temple is administered and maintained by the trust Hanuman Sewa Samiti, and the everyday puja is done by the Brahmin priest of the Dadhich clan.

Management of fairs, social works, public and private facilities such as the maintenance of the road, water supply, charitable hospitals, in the village is also looked after by Hanuman Sewa Samiti.

How To Reach Salasar Balaji Temple?

Jaipur International Airport is the nearest airport located at about 185KM from the temple. One can opt for a taxi to reach the temple.

The nearest railway station is Sujangarh Railway Station which is 27 Kms away from the temple.

The railway station is well connected to all the major cities and towns in India. Travellers can hire taxis/cabs or take buses to reach Dharmasthala from Mangalore.

Salasar Balaji is linked to neighbouring cities in Rajasthan by road and the nearby states by national highways.

RSRTC (Rajasthan State Road Transport Corporation) and private buses run regularly to and from Churu to nearby cities.