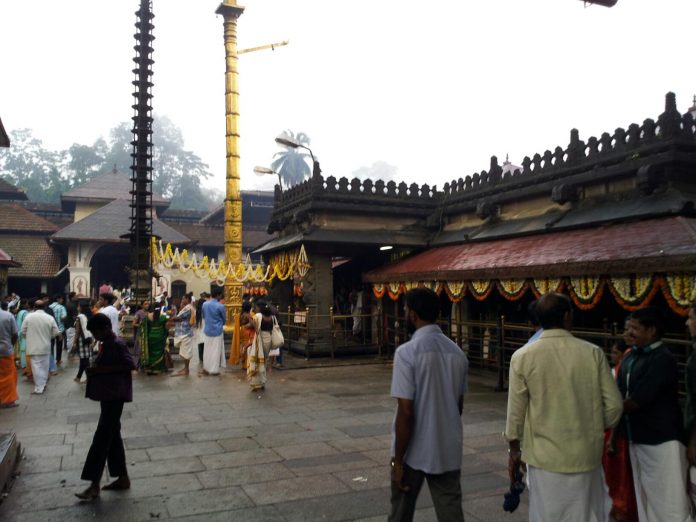 Devi Kollur Mookambika is said to be the supreme goddess, praying to her is equivalent to praying to all the gods and goddesses.

The significance of Kollur Mookambika Temple is that Goddess Mookambika is the Adi Shakti as she embodies both Lord Shiva and Goddess Shakti (Parvati).

On the left side of the Linga, as an Adi Shakti Goddess Mahakali, Goddess Mahalakshmi, and Goddess Saraswathi are present as one.

The idol of Goddess Mookambika consists of the material called the Panchaloha element. The Panchaloha is traditionally an alloy of five metals.

The composition of the alloy was a secret for several centuries and is often finds mention in the Shilpa Shastras.  Devotees also believe that worshipping idols made of the Panchaloha material imparts balance, self-confidence, health, fortune and peace of mind.

Goddess Mookambika’s idol has three eyes and four arms. She also holds a Sri Chakra in one hand and a conch in the other. On the right side, as an Udbhavalinga, Mookambika integrates with Lord Brahma, Lord Vishnu, and Lord Shiva.

As per ancient Scriptures and inscriptions, along with other proofs found in the locality, it is clear that the Kollur Mookambika Temple has been an abode of Devi Shakthi’s worship for centuries.

In an ancient inscription (dated 1481 A D) found here, the source of the Shakthi has been described. Shree Mookambika Devi in the form of Linga is the Adi Shakthi, the Creator and the protector of all forms of life.

Many of the local Kings have given lots of donations to this Temple. Prominent among them are the Kings of the “Keladi Dynasty”.

They have been offering a variety of worships to the Goddess. Prominent Kings of the Keladi Dynasty, Sankanna Nayaka and Shivappa Nayaka had renovated the Temple and gave donations for the maintenance of the Temple.

The Kings of Keladi Nayak Dynasty had believed that the Goddess is the symbol of victory. As such whenever they would win a war or drive away their enemies they were devoting the victory and celebrating it before the Goddess.

The tower of the Sanctum has a covering of gold. Besides the main shrine, several other shrines for Lord Subramanya, Dashabhuja Ganapathi, Anjaneya, Chandramouleeshwara, and Gopalakrishna are also there. Behind the Swayambhu Linga of Goddess Mookambika, an idol of the Goddess is there. The idol of Goddess Mookambika has three eyes and four arms. She also holds a Sri Chakra in one hand and a conch in the other.

Temple administration requests the male devotees to remove their shirts and vests before entering the temple premises.

Clothes such as Coats, Hats, Turbans, Bermuda, and Shorts, and Lungi are not allowed inside the temple. Women are requested to dress decently.

Women who have delivered a newborn should not enter the Temple for the first eleven days after the birth. Pregnant women are not allowed inside the temple after 7 months.

How To Reach Mookambika Temple?

Mangaluru is the nearest airport which is located at about 130 km from the temple. Taxis can be availed at the airport to the temple.

Regular private bus services are available to reach Kollur from Mangaluru city. You can opt for a Taxis that can be booked from nearby towns such as Kundapura (36 kms) to reach Kollur.