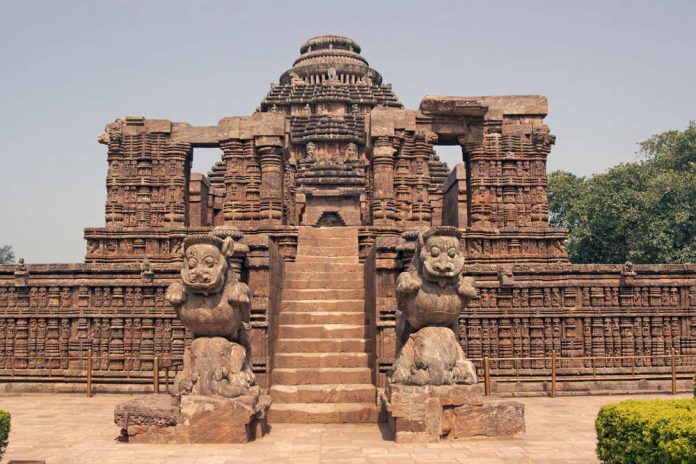 Konark Temple also known as Konark Sun Temple is a 13th-century temple dedicated to Sun god and is located at Konark about 35 kilometers northeast from Puri on the coastline of Odisha, India.

Konark consists of two Sanskrit words i.e. ‘Kona‘ which means angle and ‘Arka‘ which means the Sun which translates to “Sun’s Corner” . It is the only place in Odisha that became a part of UNESCO World Heritage Site in the year 1984.

Archeologists believe that this temple dates back to 1250 AD ( which means 750 years ) and was constructed by king Narasimhadeva I of the Eastern Ganga Dynasty . It is believed that this temple took 12 years to build.

Another story says that the son of Lord Krishna Samba was cured of a disease by the Sun Lord, therefore to honor him, Krishna Samba got the temple constructed.

The temple has a unique architecture and is built in the form of a chariot driven by seven horses on 12 pairs of decorated wheels.

The nearest airport to Konark is the Biju Patnaik Airport located in Bhubaneswar which is at a distance of 64 km and is connected to all major cities in India. One can take a taxi from there which can cost about 1000-1200 INR.

The nearest railway station is located at Puri which is 35.3 km away from the temple. One can opt to take a taxi or can board the state run buses to reach the temple.

The Orissa Tourism Development Corporation or OTDC, run by the government, has several buses regularly connecting Konark to other towns and cities within Odisha. Roads are also well connected for travel.

Set among palm trees, this colorful, casual hotel is an 11-minute walk from 13th-century Konark Sun Temple and 4 km from Chandrabhaga Beach. It is maintained by Odisha Tourist Department.