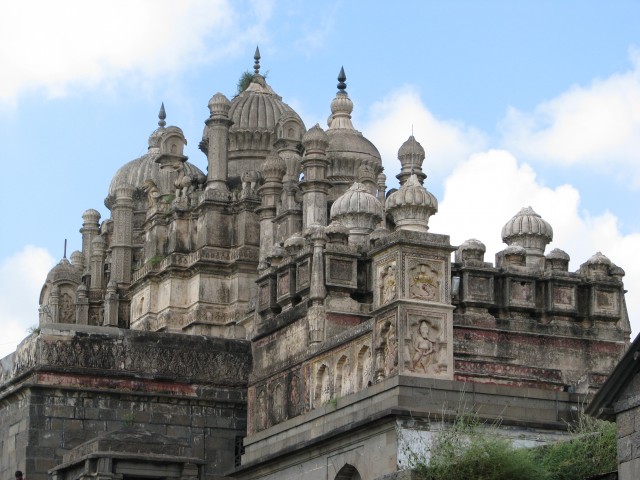 Bhuleshwar temple is an ancient temple devoted to Lord Shiva in Maharashtra. Situated on a small hill in a small village of Maharashtra called ‘Yavat’, the temple is located around 54 kms from Pune city.

The calm and cool ambience of the temple creates a peaceful experience for the devotees to offer their prayers. The classical stone carvings seen all over the temple walls give the temple an antique and a historical feel.

Devotees from all around Maharashtra and the neighboring regions visit the temple. It is also visited by historic researchers and ancient-architectural enthusiasts.

The place got its name from a story. As per the ancient stoies, Lord Shiva came here to meditate. Then Devi Parvati, dressed as a tribal woman danced to fascinate Shiva and he got attracted to her beauty. Finally, they went to Kailash Parbat and got married.  “Bhul” is a Marathi word which means “To sedate”.

As Shiva got attracted towards Paravati, hence Shiva got another name – Bhuleshwar. Hence the name of the temple.

Bhuleshwar Temple has lately been acknowledged as a protected shrine. The temple was constructed during the reign of the Yadava rulers. Bhuleshwar temple was built in 13th century (1230 AD).

The temple was originally a fort by the name Mangalgadh and is also known as Daulatmangal Fort. Later the temple was invaded by Aurangzeb, a Muslim ruler and was reconstructed again.

The fort was constructed by Murar Jagdev in 17th century. He built the fort on the hill of Bhuleshwar Temple to keep a watch and get a view of the city. The entrance of temple is called “Gaimukhi” which dates back to Shivaji Maharaj’s era.

The babrbarity of Aurangazeb and Muslim invaders is still visible inside the temple, We can see many disfigured statues, aurangzebs men performed this act of damage. It was an attempt to challenge the Hindu Art.

Later, muslim workers reconstructed the sculptures during Chatrapati Shivaji’s tenure as a ruler. The effect of invasion can be felt till today as we can see hidden entrances and steps to reach the top form either side, there’s also a very narrow passage that takes you into the depths of the temple.

These small nuances show the measures taken by the then rulers of the temple to prevent another Mughal invasion. Sculptures can be seen at every wall. Unfortunately, all these sculptures bear the marks of hammers. The Muslim invaders left a negative stench all around the temple in the form of their scars on the beautiful statues.

This temple is loaded with beautiful carvings – at the entrance, on the inner walls, outer walls, pillars etc. – with such a complexity and precision that one wonders if the temple is really built by humans!

Bhuleshwar Temple is made from black basalt rock (of kailasanatha temple at ellora) which was brought especially to construct the temple. The rock is different from the other rock brownish basalt that is seen in the surroundings.

How to reach Bhuleshwar Temple ?

The nearest airport Pune International Airport is at Pune which is located at 54 KM. One can avail taxi or bus services from airport to reach the temple.

The state owned and private buses connect Bhuleshwar with the rest of the country.